The Manila Carnivals drew much of its income from the many shows that were patronized by visitors who came in droves to witness such special attractions. To gain access, one had to buy tickets at the entrance gate or from the takilya booths at the show venue like the Hippodrome or the Carnival Auditorium. Complimentary passes were also issued to select guests who had exclusive entrances to the shows. 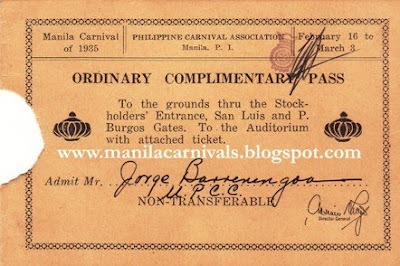 The Hippodrome of the “Celestial City” was the venue for the many equestrian shows that were staple favorites of the fair. There were horse stunts, cavalry horses parades, pony rides and rodeo shows that were presented by Americans. But dogs also had their moments at the Carnival, when dog shows were incorporated in the program. 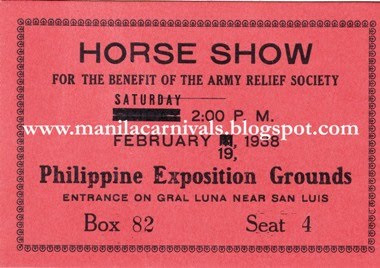 Also held at the Hippodrome were the musical shows put up by the Constabulary Band, then famous throughout Far East Asia. Cultural shows were offered by American Indians as well as other ethnic groups like the highland tribes of Mountain Province and the Moros. They shared centerstage with military men who displayed their skills in their synchronized drills and maneuvers. 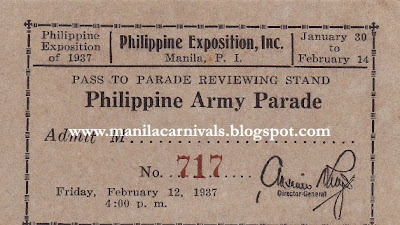 Different venues hosted many sporting events but the Carnival Stadium was the site of a few sports competitions like indoor baseball, soccer and inert-scholastic track meet.

Eagerly anticipated were the circus shows, often featuring foreign acts. Filipino acrobats livened up the shows with such stunts as an aerial fall where a young lady descended to the floor from a height of 500 feet---held only by her hair. There were magic shows, Russian ballets and arcade games reminiscent of Coney Island’s. Tickets were bought for a ride on “La Rueda Ferris”, “El Carouselle” the Monkey Speedway, and “The Frolic”, which simulated an airplane ride. 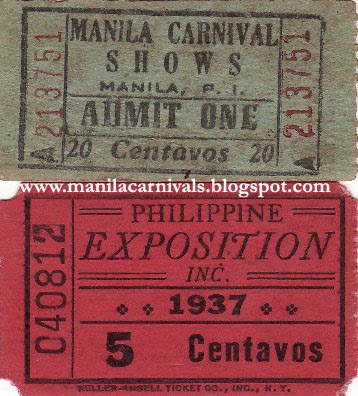 Then there were the series of grand balls in which thousands of tickets were issued —Comparsas, Coronation Balls, Army and Navy Ball, Parejas Ball, Fancy Dress Ball, Stockholders’ Ball, Inter-Collegiate Ball, University Nights—extravagant events people went to, to see and to be seen. In 1921, ticket prices ranged from 20 centavos (for the children’s ball) to Php 6.00 to the Coronation Ball (good for a gentleman and 2 ladies).

As souvenirs of the Manila Carnivals, used tickets and stubs were kept by Carnival fans in scrapbooks or bundled with old letters. Some were kept between pages of books, ledgers and notebooks only to be rediscovered by ephemera collectors today, who prized them as historical collectibles.
Posted by Alex D.R. Castro at 11:53 PM