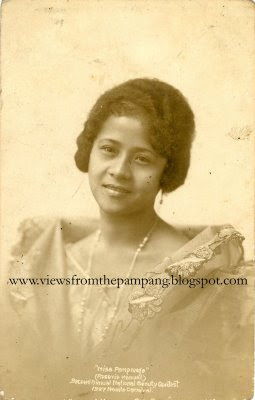 ROSARIO MANUEL, Miss Pampanga 1927. A beauty of renown from Bacolor, made it to the national finals of the 1927 edition of the Manila Carnival.

True to its title as the “Athens of Pampanga”, Bacolor was not just a cradle of culture, it was also the seat of beauty, echoing the fabled reputation of Greece as the land of beautiful goddesses--Hera, Aphrodite and Athena—who figured in perhaps, the 1st documented beauty pageant of ancient times, as judged by Paris.
Bacolor belles like Luz Sarmiento, Paz Sanchez, Consuelo Santos and Elisa Gutierrez were regarded as the town muses in the mid 1920s-1930s. A more notable titled beauty however was Rosario Manuel, crowned Miss Pampanga 1927. She was the daughter of Generoso Manuel and Gliceria Lacsamana of Cabambangan, now the town’s poblacion.

With her victory, Rosario (Chayong) gained the right to represent the province in the 2nd National Beauty Contest sponsored by The Philippine Free Press. Doe-eyed Rosario went to Manila for the competition to make her bid for the Miss Philippines crown. It was a tall order for Rosario, as among the previous year’s winners was a kabalen—Socorro Henson of Angeles, who reigned as Manila’s Carnival Queen of 1926.

In the 1927 edition held from February 12 to 27, 28 beauties from around the country participated. Two of the contenders that year were Amelia Romualdez, Miss Leyte, who bore a striking resemblance to her first cousin, Imelda Romualdez and fellow Kapampangan, Luz Besa of Tarlac. The judges were reminded that “in the selection of the most beautiful ladies, (you) shall consider, besides physical beauty, the personal charms and the general refinement and composure of candidates”.