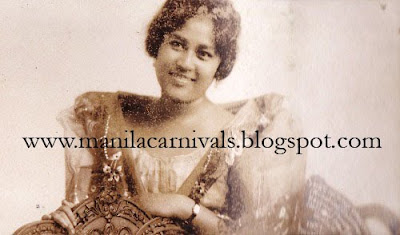 1927 MISS NEGROS ORIENTAL, RIZALINA "Saling" CALUMPANG
The Calumpangs are one of the oldest families of Tanjay, which, at the time of the Spanish conquest was one of the more established and biggest settlements outside of Cebu. From this esteemed family came Rizalina Calumpang y Borromeo, Miss Tanjay of 1927, and who was eventually named as Miss Negros Oriental 1927. "Saling" was born on 30 December 1908, hence her Rizal-inspired name. Rare portraits of her show her distinct mestiza features, a result of the intermarriages of the Calumpangs with Spanish families (her paternal grandfather, Martin Calumpang had a Spanish-Irish friar for a father). She was one of the few Negrense beauties ever to participate in the national fair. She was sent to the 2nd National Beauty Contest of the 1927 Manila Carnival, but did not place. The crown went to an Escolarina, Luisa Marasigan of Tayabas, who represented Manila.

The beautiful “Saling” later became the wife of a dashing Baisanon, Fructuoso Montesa. Her descendants and relatives are renown personalities themselves, and they include the 1960 Miss Negros Oriental, Dr. Estela Guerrero Navarro (her husband is a 2nd cousin), Paquita Roces (the 2st Camay Girl), director Eddie Romero (her nephew), actress Chanda Romero (her grandniece), former Senator and Ambassador to the Court of St. James, Jose Calumpang Munoz-Romero (her 2nd cousin) and Dr. Jose Ma. Veloso Borromeo (a cousin, husband of Amparo Noel, 1912 Reina de Bisayas) The first and only Miss Negros Oriental bet to the national Carnival of Manila passed away at the age of 81 on 23 August 1990.

(Many thanks to Ron Jacob Abrasaldo Calumpang for the additional info on his relative, Miss Negros Oriental 1926 Rizalina Calumpang)
Posted by Alex D.R. Castro at 6:23 AM

Thank you very much Señor Alex for this post, and most especially the photo, of our dear Tia Saling.

The former Rizalina Borromeo Calumpang was also a cousin of Dr. Jose Maria Veloso Borromeo, the husband of the 1912 Reina de Visayas Amparo Benitez Noel. Tia Saling herself went on to marry a dashing Baisanon, Fructuoso Montesa. By being a second cousin to former senator (and later the first ambassador to the Court of St. James in England) Jose Calumpang-Muñoz Romero, she is the aunt of national artist Eddie Romero and also the grand-aunt of Chanda Romero. She was also a second cousin to the husband of Miss Negros Oriental 1960 Dr. Estela Guerrero Navarro (later Dr. Estela G. Navarro vda. de Ferrer de Calumpang). She is also a distant relative of the first Camay girl, Francisca 'Paquita' Roces. Her paternal grandfather (Martin Calumpang) was a 'gobernadorcillo' whose father was a Spanish-Irish friar and whose mother a daughter of one of the previous 'gobernadorcillos' of the town. She was born on 30 December 1908 and died at the age of 81 on 23 August 1990.

Btw, Tanjay 'was one of the more established and biggest settlements "outside" Cebu' at the time since it is in Oriental Negros. Due to this, it was made administrative capital of the province before the capital was moved to Dumaguete much later.

Thank you for the additional details on this beauty queen's life. I will add these to her short feature on this blog and will give you proper credits. Again, salamat.