92. THE EXALTATION OF BEAUTY, IV 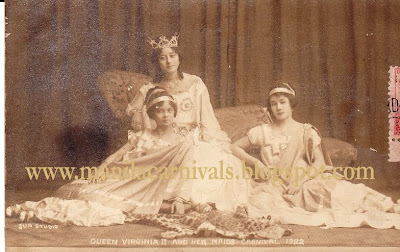 As the Carnival Queens enjoyed immense following, they were sought after by corporate sponsors to endorse their products. As early as 1924, longtime Carnival sponsor Coty perfume issued advertising photo cards of the winner, Trinidad Fernandez, with a handwritten endorsement of “Les Parfums de COTY Paris--favored above all French perfumes throughout the world”. On it, Trinidad had written: “Los perfumes ‘Coty’ son mis preferidos—Trining Fernandez, 12 de Febrero de 1924”. (Coty perfumes are my preferences). 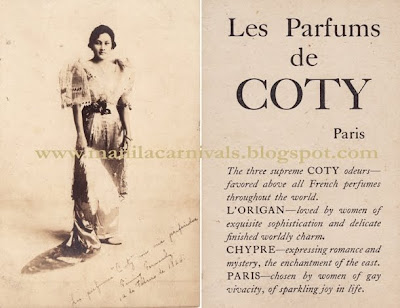 By the 1930s, when advertising in the Philippines became more sophisticated and Western in its approach, testimonial print ads featuring winners attesting to the product benefits of Coty were published in leading magazines nationwide-further proof of the pulling power of a national figure that was the Carnival Queen. 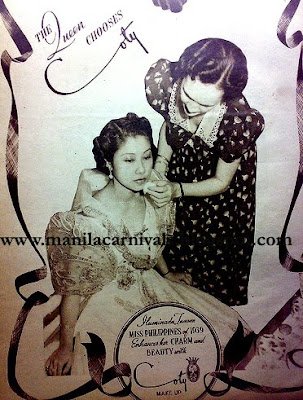 1939 QUEEN ILUMINADA, gets made up with COTY Cosmetics, a major sponsor of the Manila Carnival, in a full page endorsement ad.

Overall, the Queens of the Manila Carnival succeeded in redefining the traditional concept of beauty through their groundbreaking achievements, heightened social awareness, patriotism and moral uprightness, taking their being national role models to heart. The image of a Filipina beauty queen transformed as a powerful agent of change was concretized in the Carnival years with winners like Pura Villanueva (1908), an indefatigable suffragist and social worker, Paz Marquez (1912) who, by 1919 became a school founder after years of being an acclaimed writer in English, Trinidad Fernandez (1924) , a patroness of the arts and Trinidad de Leon (1920) who went on to become a First Lady after the election of his husband Manuel Roxas as president of the Philippines.

(Reference: Hazel McFerson. Mixed Blessing: The Impact of the American Colonial Experience on Politics and Society in the Philippines (Contributions in Comparative Colonial Studies): 2001)
Posted by Alex D.R. Castro at 1:55 AM