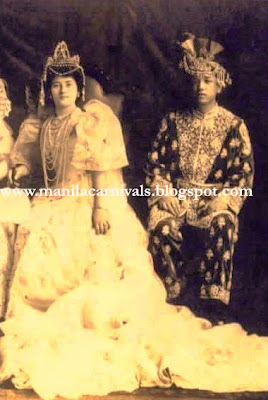 1908, MANUEL GOMEZ, King of the Orient
The first King Consort of the Manila Carnival is Manuel Gomez Jr., son of Dr. Manuel Gomez, head of the Statistics Department of the Bureau of Health. Manuel was a young Manila executive of the La Germinal Cigar and Cigarette Factory, a major sponsor of the 1908 Carnival. Manuel was holding office as La Germinal Secretary at Calle Marquez de Comillas when he was appointed to be the king consort of Pura Villanueva. Named as King of the Orient, he had a float of his own, of Indo-Chinese inspiration.

As the consort, he had to participate in dramatic stagings which called for him to welcome the Occidental King in a fluvial ritual. For his royal affairs, he was always dressed as an Indian Maharajah, complete with a turban and a blue velvet outfit. His demeanor, as one newspaper reported, was truly befitting a highborn: “..looking majestic and august in his dignity, and maintaining his bearing al rango de lo excelso”.
In the absence of Manuel, consorting services were provided by Mauro Prieto (father of a future Carnival Queen, 1921’s Carmen Prieto and La Germinal head), Tomas del Rosario and the fiscal of Cavite, a certain Mr. Sta. Maria.

OTHER ESCORTS:
Feliciano Arcega Basa, Jr.
Son of Feliciano and Amelia Arcega. Became a president of the Philippine Librarian Association. Also wrote books about international business and commerce.
Emilio Veloso
Became a hacendero with vast land holdings in Nueva Ecija.
Juan Zalvidea
Clodualdo TempongkoClodualdo Tempongko was the son of Ambrocio Tempongko and Inez Calixto y Ahchuy from Binondo. He was one of the first graduates of Agriculture from U.P. Los Banos. Unfortunately, he died young. His sisters who were included in Pura’s court were Elisea (Cheang) and Purificacion (Chong), who would later became Mesdames Macapinlac and Roco. Their other siblings include: Agapita(Magpayo), Demetria(Quintos), Cristina(Ongpin) and Felipe Tempongko, a graduate of Letran who fought in the Philippine Revolution, particularly in the struggle later against the Americans. 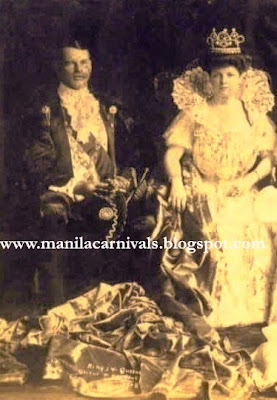 1908, COL. GEORGE T.LANGHORNE, King of the OccidentCol. George Langhorne, a Spanish War veteran, was the aide de camp of Maj. Gen. Leonard Wood, governor of the Moro Province, and later Army Chief of Staff. After his Philippine stint, Langhorne went back to the United States and participated in several campaigns in Texas against the Mexican revolutionist, Francisco “Pancho” Villa in 1916. In 1917, he became commander of Fort Bliss in El Paso, Texas. On 23 April 1928, Langhorne married Mary K. Waller of Chicago in Cliveden, England 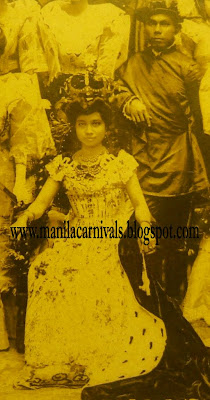 1909, FRANCISCO Guerrero AGCAOILI, King Consort of Queen Julia AgcaoiliThe 1909 Queen, Julia Agcaoili, had her own brother, Francisco Guerrero Agcaoili as her King Consort. His parents were Julio Agcaoili, the first governor of Ilocos Norte and Ruperta Guerrero. Francisco was educated at Cornell (1904-1907) where he finished Chemical Engineering. He married Cipriana Davis and fathered a child with Winifred Irene Du Roucher.

1912, (unknown)
MANUEL Hernandez BERNABE, Escort of Paz Guzman, Queen of Luzon
(b. 17 Feb. 1890/ d. 29 Nov. 1960 ) Parents: Timoteo Bernabe and Emilia Hernandez. Graduated from Ateneo with a Bachelor of Arts degree. Became a noted poet, linguist and politician, excelling in ‘balagtasan’. Wrote for La Vanguardia and taught Spanish at the U.P.
LUIS ORBETA, Escort of the Queen of Mindanao
BALDOMERO PELAEZ, Escort of Remedios Reyes,Queen of Mindanao
Born in Misamis Oriental to Miguel and Dominga Pelaez. A brother, Gregorio Jr. is the father of Emmanuel Pelaez, the Vice President of the Philippines in 1961.
*****


1916, JUAN CHUIDIAN, King Consort of Queen Manolita Barretto
Juan “Johnny” Chuidian was descended from the Chuy Dian family who migrated from China and became Catholic converts in the Philippines. His parents were Telesforo Chuidian, a businessman and nationalist who helped financed the Revolution and Dolores Asuncion. The Chuidians were longtime family friends of the Barrettos and are related to the Sunicos of Binondo. 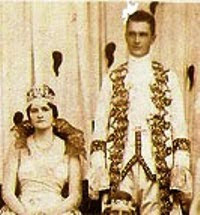 1917, MAJ. WILLIAM VAUGHN, King Consort of Queen Mela Fairchild
An officer of the U.S. Army. He and Mela Fairchild were married a year after her reign. They had two children, Bradley and Lydia Fairchild. They were later divorced.

OTHER ESCORTS:
Jose Mossesgeld-SantiagoNoted opera singer. Son of Simon Mossesgeld-Santiago and Rosa Font of San Miguel de Mayumo and Manila. He left the Philippines in 1926 to embark on a singing career in opera houses in Italy, South America and the United States. He had a wide repertoire that. He sang at the Roxy Theater in New York and also recorded Filipino songs for Columbia records in the United States. His greatest feat is his performing in one of the world’s most famous opera houses-- La Scala—a prize for winning the Enrico Caruso vocal competition in the United States.

Jose married Dolores Andrada and had a son, Enrico. With Isabel Llewellyn whom he met while pursuing a career in the U.S., Jose had Joseph and Phillip. He had three more children, Mila Santiago, Teresita and Sigfrido, the latter two with Genoveva Perlas. Afer conquering the world stage, he returned to Manila to teach classical singing while producing operas. He passed away on March 5, 1959.


1920, RALPH EARNSHAW, King Consort of Queen Trinidad de Leon
Ralph (b. 24 Oct. 1894) was the son of Brigida Andres with Tomas Earnshaw, who, as the Mayor of Manila in 1908 had been the Committee Head of the Fluvial Parade in that year's Carnival.The Earnshaws were of English ancestry and Ralph's father was the brother of millionaire Don Manuel Earnshaw, head of Manuel Earnshaw & Co., a leading shipbuilder and boiler maker.

Ralph was the personal choice of Don Ceferino de Leon for his daughter Trinidad, the queen-elect of the 1920 Victory Carnival. But their courtship was short-lived as Trinidad went on to marry Manuel Roxas of Capiz. Ralph met and married Sofia Hernando (1900-1994), the beautiful daughter of Aurea Tanchangco and Dr. Eugenio Hernando in April 1922. Aurea is one of the famous “Women of Malolos” while Eugenio was a doctor in the Spanish Army who was loyal to the Filipino cause. In 1938, he was named Director of the Bureau of Public Health by Pres. Manuel L. Quezon.

Ralph and Sofia resided in Malolos during World War II, where the Hernandos—including Ralph—suffered much under the Japanese. The couple had three 3 children: Tomas, Remedios and Angel. Ralph passed away on 27 June 1983.

OTHER ESCORTS:
Francisco Varona
Politician and journalist, He was sent to Hawaii and the West Coast of the United States, as the head of the Labor Commission, to investigate the serious complaints of Filipino laborers. As a newspaperman, he started his career with Libertas, then with El Renacimiento Filipino before he became editor of La Vanguardia. He later acquired La Consolidacion Nacional and renamed it El Debate. He became the first editor of EL Debate, and his daily comments on national affairs became food for thought for government leaders
Francisco Tecson
Francisco or Pakong finished a dentistry course and became the first ever president of the National Dental Association, founded in 1924. The famous kundiman, “Nasaan Ka Irog?” composed by Nicanor Abelardo was based on Pakong’s doomed love story with his girlfriend Segunda. It was to him that the song was dedicated.
Alejandro Pardo Roces Jr.(b. 24 July 1900/d. 8 Jul. 1943) Son of Alejandro Roces and Antonia Pardo. Brother of Joaquin “Chino” Roces. Married to Joaquina Heras. He acquired ownership of The Manila Times in 1930 after it was sold by Englishman Thomas Gowan who founded the paper in 1898. His father had been a manager of the very popular T-V-T publications. He was a victim of the War, together with his father, Alejandro Sr.
Francisco Escolar LimjapSon of Mariano Limjap, the Chinese-Filipino businessman who helped finance the Revolution. His siblings included Esperanza (the original 1908 winner), Leonarda and Perico Limjap who married the 1923 queen, Catalina Apacible. Francisco married the 1926 winner, Socorro Henson in 1929 with whom he had 4 children.
Posted by Alex D.R. Castro at 4:14 PM

I would like to make a correction in the entry about Jose Mossesgeld-Santiago. The entry states that Jose married Isabel Llewelyn and they had Enrico, Joseph and Phillip. This is not correct.

Jose married Dolores Andrada and they had a son, Enrico. Jose then left for the United States to pursue his operatic career. Dolores and Enrico remained in Manila.

In the U.S., Jose met and married Isabel Llewelyn and they had two sons, Joseph and Phillip.

I would appreciate it very much if this correction can be made.

I regret the error. The entry has been amended. Many thanks for pointing the mistake out.

Jose "Johnny" Chuidian was the uncle of Conchita Sunico (Ms. Phil 1935); his sister, Pacita, married Tomas Sunic, the son of Hilario Sunico. I am a descendant of Julio Sunico, Hilario's brother.