89. THE EXALTATION OF BEAUTY, I

When the very first Carnival began its search for the Queen to rule over the national festivities, emphasis was put on the ‘quality’ of candidates. W. Cameron Forbes called on the pater familias of the country’s most prominent families, to field in their daughters and lend their distinguished presence and participation to the biggest fair of the land. Indeed, the candidates’ lists read like who’s who from the elites of Philippine high society. The pedigreed beauty queens were extolled through street parades and discussed constantly on every leading paper and magazine, meriting prime space and enthusiastic coverage. 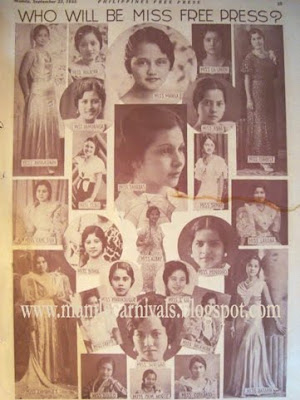 MISS FREE PRESS PHILIPPINES CANDIDATES. Free Press sponsored its own canddiates to the annual Manila Carnivals. The paper invited individuals to send pictures of beauties from whom they selected the finalists. Top middle picture shows Marcelina Cuenca, who won Miss Manila of Free Press and who later won Miss Visayas in the 1934 Manila Carnival finals.

An editorial from Philippine Free Press observed: “During the Carnival, we glorify Woman, placing her on a high pedestal and showering her with praise and attention. Thus, we pay due homage to the eternally feminine qualities of womankind, to her beauty and grace and charm.”

But by putting them on pedestals to be worshipped and honored, we have also unwittingly excluded them from the real world, removed from the strifes and struggles of daily living—in sharp contrast to the desire of the new Filipina to reinvent herself and be more than a beauty to be objectified. On the surface, it would seem that the Carnival Queens embodied the women who stuck to society’s patriarchal definition of her sex. 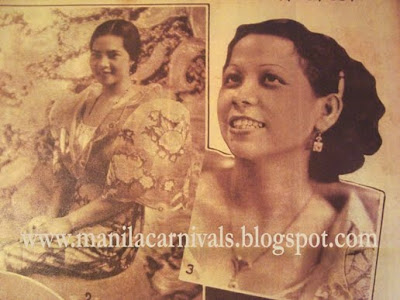 BEAUTIES TRANSFORMED. Two candidates to the 1934 Manila Carnival : the brain and beauty UP coed Consuelo Villamor and the socialite Pacita Madrigal, who later became a Senator in the Magsaysay administration.

In truth however, a review of the winners show them to be forward-looking women of the times who are ready to descend from their lofty pedestals to join the hurly-burly of life. The Free Press editorial gave proof to the Filipina’s coming-of-age as emerging leaders of the new 20th century: “Witness the recent convention of the National Federation of Women’s Clubs where members of the fair sex discussed everything from politics to hygiene. Witness also the invasion of women in the various professions once believed to be the exclusive field of men”.

When the delegates to the 2nd National Beauty Contest convened at the Colegio de Señoritas, the school directress, Socorro Hernandez, took note of the women power gathered inside the halls of the school, leading her recognize the significance of the event: “Above all, this gathering is replete with meaning for while it is intended as a consecration of beauty, at the same time, it is an eloquent manifestation of the tremendous transformation that is going on in the soul of the Filipino woman. 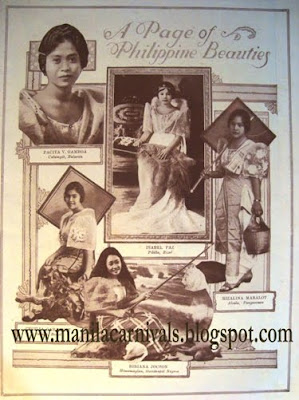 WHO'S THE FAIREST FILIPINA OF THEM ALL? A bevy of Philippine beauties from where Carnival candidates were chosen. Philippine Free Press ca. 1930s.

What is lasting in this gathering is not the image of physical beauty that in a short time fades from our memory, no. What is everlasting in this brilliant festival is the awakening of a consciousness of personality in the Filipino woman. It is the conquest of her real place in our society that makes gatherings of this kind valuable”.