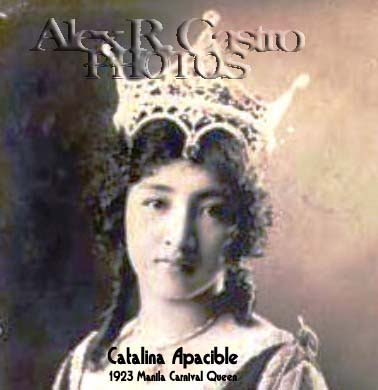 1923 QUEEN OF THE MANILA CARNIVAL. Catalina Apacible y Castillo, of Balayan, Batangas was the daughter of the well-known patriot, doctor and diplomat, Dr. Galicano Apacible.
In the 1923 Manila Carnival, a Batangueña with a distinguished lineage reigned supreme: Catalina Apacible y Castillo. She was the only child of physician, patriot and statesman Dr. Galicano Apacible and Conchita Castillo of Balayan. Galicano was a noted propagandist and also one of the founders of La Solidaridad.

As an ‘unica hija’, Catalina or Neny, was treated with parental strictness, but also with indulgence. So, when her sponsor, the Bachelors’ Club, asked her to run for the queenship, her parents gave their total approval. Immediately, friends and admirers began working for her victory, led by Eugenio Lopez, a young man from a wealthy Iloilo family. He had actively participated in previous carnivals before, and was a consort to one of the princesses of the previous 1922 court. He was relentless in his campaign for Neny, mobilizing musicians and organizing torch parades to raise much-needed funds. 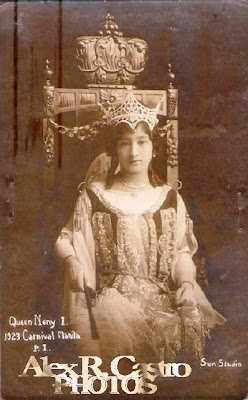 QUEEN NENY I. Coronation picture of the beauty from Batangas.

Neny’s closest rival was a beautiful mestiza, Conchita Seiboth, but even she and her backers were no match to the well-oiled vote generating machine of Neny’s avid supporters. The 19 year old beauty was thus proclaimed as Queen of the 1923 Manila Carnival.
A 1923 article from The American Chamber of Commerce Journal described the events leading to the royal coronation: “The big outstanding event of the Carnival Week is the coronation of the Queen, which is performed with all the formal ceremony and pomp of real life. No expense is spared for costumes and properties. For days, the Queen and her court are rehearsed by the best talent available, to go through the elaborate ceremony in a proper manner. 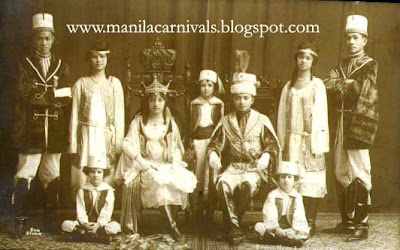 THE 1923 ROYAL COURT. Queen Neny's top drumbeater, Eugenio Lopez, was the logical choice of her father to be her King Consort.

On the night of the coronation, the brilliantly lighted Auditorium is packed with a huge throng of Carnivalistas who watched the elaborate ceremony with bated breath snd burst out with a tremendous shout when the Queen finally takes the throne after the diamond-studded crown has been placed on her pretty head by the Master of Ceremonies.” 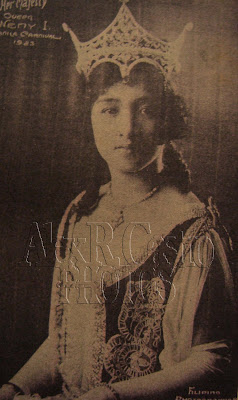 THE QUEEN AS A CZARINA. Neny cuts a beautiful figure at her coronation dressed as a Russian czarina. A similar themed ball had her dressed like Cinderella, complete with a powdered wig.
Indeed, Neny’s Grand Coronation was marked with much fanfare and gaiety. For one, the coronation theme was very unique—it was Russian. Wearing a czarina outfit complete with a vest and boots, Neny was attended by a court dressed like Hussars. Her King Consort was none other than Eugenio Lopez, a well-deserved partner chosen by Dr. Apacible himself. 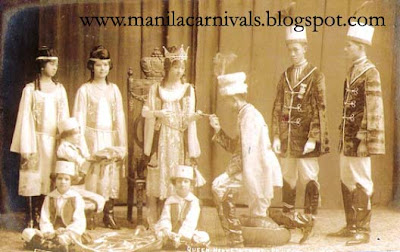 THE RUSSIANS ARE COMING! The Coronation Theme of the 1923 Carnival was Russian. The escorts were dressed like Hussars while the ladies wore czarina outfits.
When her Carnival days were over, Neny married Pedro ‘Perico’ Limjap in 1928. Perico too, had a noble pedigree, son of a well-known Chinese-Filipino family. His sister, Leonarda was in fact chosen as queen in 1908, but had chosen to relinquish that title. Another sibling, Esperanza, was married to Sergio Osmeña, a future president. A brother, Francisco Limjap would also marry a Carnival Queen.

The Limjaps had three children—Eddie (a pilot), Evelyn ( medical doctor) and Connie. But their happy family life was shaken when Perico, who was engaged in underground guerrilla activties, was captured and executed by the Japanese during the second World War. After the war, Neny, the widow, went to America for an eye surgery and decided to stay on in Daly City, California with her children. A woman of resilience and independence, she lived alone and even drove her own car. Though uprooted from her country, Neny regularly visited the Philippines and died at age 78.. 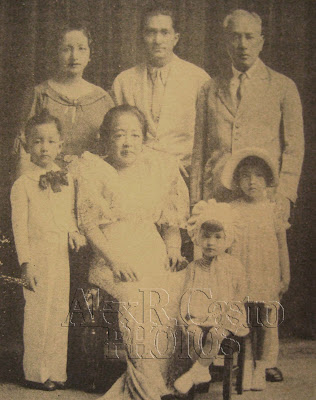 THE APACIBLES. Back Row: L-R, Neny, husband Perico Limjap (executed by the Japanese during the war), father Dr. Galicano Apacible. Front: L-R: Son Eddie (who became a pilot), Mrs. Concha Apacible, Evelyn ( who became a doctor) and seated in the foreground is Carmen.

Fascinating piece of history. Neny's husband Limjap was as mentioned Chinese and the way his surname is spelled--Lim-- suggests he was Hokkien Chinese from a part of Southeast Asia under British colonial rule.

Neny Apacible Limjap died at the age of 78

She ended up living in a condominium in Torrance, California.