The 1922 Manila Carnival and Industrial Fair was held from 4-12 February 1922, headed by the President of the Commonwealth, Manuel L. Quezon (L), with the Governor General of the Philippine Islands, Leonard Wood named as honorary president. Arsenio Luz (R) was the Director-General.

The premise of this year’s carnival was that “it is more than a fun and folly fiesta. The promotion of health, education, commerce, industry and community spirit are permanent interests of this great annual event”.

The Carnival authorities have spared neither effort nor expense in making the fair the biggest and best free attraction on the Carnival grounds. The Main Exhibition Building housed the displays of the Insular Bureaus, Provincial Governments and Business Houses of the Philippines. The National Federation of Women’s Clubs. American Guardian Association. Public Welfare Booth, Anti TB Society and the Red Cross had their booths in this building for demonstration purposes. Beneath the Tower of Jewels there is an attractive display of electrical merchandise. 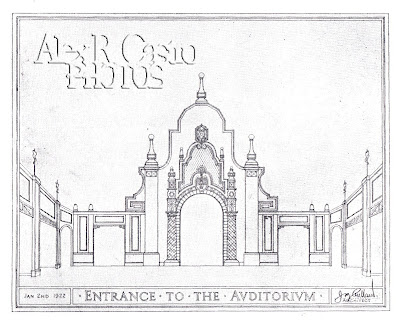 ENTRANCE TO THE AUDITORIUM. Bluperint as drawn by Arch. Juan Arellano. 1922 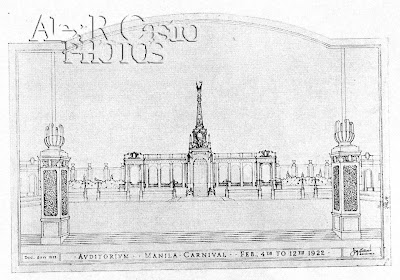 THE CARNIVAL 1922 AUDITORIUM. A designed by Arch. Juan M. Arellano.

February 8 was designated as a “Merchants’ Day”, in recognition of the role of commerce in nation-building. The 3-day Far Eastern Commercial-Industrial Convention was held within the Carnival period, attended by members of the the chambers of commerce, ending with a fabulous “Merchant’s Ball”. A Sample Fair Theater was also set up for selling and order-taking of different commodities and products. 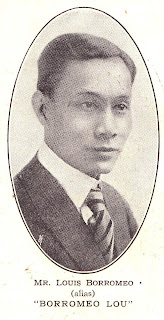 Special sideshow attractions included stunt performances by Oscar Varley Babcock, whose “Death Gap Loop”—in which his automobile goes on a swift descent down a narrow incline and makes a death-defying loop as it twists and turns—was billed as the most sensational feature of the 1922 Carnival. Borromeo Lou, the Filipino impresario, also wowed the evening crowds with the theatrical performances of his troupe. Other much-talked about acts included magicians and illusionists Orville the Great and Professor Shaw, with his mystifying card tricks and sleight of hands.

The 1922 Carnival staged a record number of 4 parades, starting on Feb. 4, with the Carnival Parade participated by costumed and uniformed groups. This was followed on subsequent days by a series of Educational Parades, Military Parades and the new Health Parades, to call attention to the widespread effort s of different health and civic groups to suppress disease and maintain a high standard of public health. 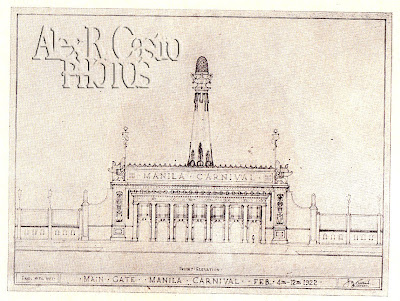 For Carnival revelers, there were the opulent and festive balls to look forward to. Daily balls were held from 4 Feb. to Feb. 12., beginning with the International Ball, Parejas Ball (prizes to the Most Comic and Most Original Couple), Coronation Ball, Comparsa Ball, Children’s Fancy Dress Ball, Merchant’s Ball, Stockholders’ Ball, Army and Navy Ball, Popular Ball and finally, the Grand Carnival Ball.

COMMERCIAL AND INDUSTRIAL FAIR HALL. For exhibition of the country's finest manufactured produce.

An historical pageant was presented by the Dramatic Association of the University of the Philippines to picture the splendor of the court of the Rajahs of Manila before the coming of Legazpi. Characters like Lakandula and his Queen, Legazpi, Rajah Soliman, Augustinian priests, Spanish soldiers, dozens of native princesses and Asian merchants came to life in colorful costumes to thrill an adoring crowd.

Then there were the exciting Athletic Competitions that featured everything from Cricket. Soccer to Track, Golf, Bowling, Baseball, Volleyball and Basketball. A Dog and a Horse Show were even held to show off canines and equines of the most exotic kind.

The 1922 Manila Carnival will also be remembered for its Queen and her King Consort, she, a quiet, unassuming beauty and he, an American-educated achiever who, together, went on to win greater acclaim in the field of international diplomacy and government service.

Alex, I'm working on the typhoid epidemic that peaked after the 1922 carnival and included a link to your excellent blog. It is a work in progress. You don;t happen to know the name of the Japanese firm that sold ice drops at that years Carnival, do you?
https://wp.me/p3VPK-hj