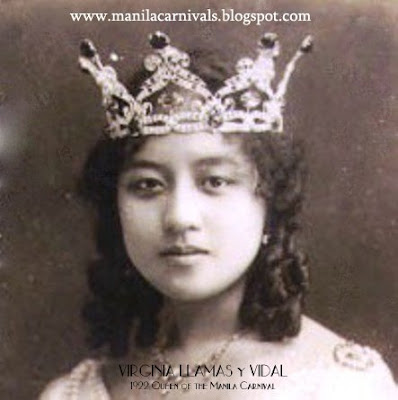 1922 QUEEN OF THE MANILA CARNIVAL. Virginia Vidal Llamas, a student from the progressive Philippine Women's College, beat candidates from exclusive schools for the crown.

1922 saw another banner year for the Manila Carnival, as the annual fair was used by the Americans to emphasize and instill health and sanitation consciousness among the Filipinos. The first “health parade” was witnessed in this year’s edition with hundreds of sanitary workers—from street sweepers, fumigators, health group members and puericulture officers participating. It was also this year that attractive art competitions (Fernando Amorsolo won 1st prize for his painting) and unusual ethnic exhibits (the mummy of 12th c. Benguet demigod Apo Anno was put on display) were put up for public enjoyment.

The Queen selected to reign over the fair was a quiet, demure collegian from Pagsanjan, Laguna: Virginia Llamas y Vidal. Born on 1 July 1905, she was the eldest daughter of Laguna’s former governor, Vicente Llamas and Feliza Vidal, in a brood that also included siblings Vicente Jr., Alicia, Ysmael, Ramiro, Gloria, Marina and Pelagio. 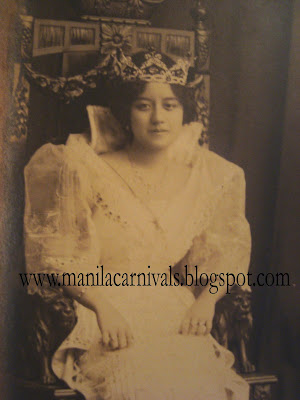 QUEEN VIRGINIA I. In her official picture as a Carnival sovereign.

When her father visited America, he was smitten by the sights of Virginia, so when he named his daughter after the said U.S. state. Virginia’s parents were progressive thinkers so when it was time for her o enter college, they sent her off to the newly-opened Philippine Women’s College known for its democratic system of education introduced by the Americans. It also helped that the founders, the Benitezes, were close family friends.

When the Carnival season arrived, contestants were outsourced from schools and it was in this manner that Virginia’s name was included in the official candidate list. Not only did the student population of PWC supported her candidacy but also The Herald, a leading newspaper edited by Conrado Benitez, whose wife, Francisca, was the PWC president.

The queenship was closely contested by several girls of irrefutable qualifications, led by Vicenta Osmeña, daughter of then Speaker of the House, Sergio Osmeña. Nena Valera, the candidate of El Ideal also was a rival to contend with. Both girls by the way, were also backed by the very influential Bachelor’s Club. Then there was Margaret Murray, the American candidate of Manila Bulletin. But another group had formed behind the candidacy of Virginia, whose aim was to elect a “really popular queen”.

THE ROYAL TRIO. Queen Virginia, flanked by her two princesses, in Roman costumes.

Virginia was herself a regular student of a progressive college, atypical of other candidates who came from exclusive schools favored by society’s elite. Considering her as one of their own, student leaders, thus, rallied behind Virginia, tirelessly campaigning and soliciting votes in her behalf. Young Fernando Lopez of U.S.T.’s College of Law, for instance, organized a dance affair that proved to be one of the biggest fund-raising event for Virginia. When all the votes were tallied, Virginia garnered 2,868,400 votes, giving her a lead of almost a million votes ahead of the second placer, Nena Valera. Her victory made it to the headlines of The Herald which proclaimed: “Ave Regina! Queen Virginia II, Hail, All Hail—Queen of the People!” 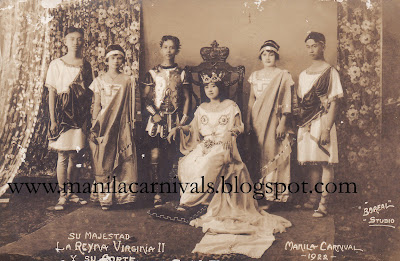 As The Herald was instrumental in her win, the management also handpicked her consort, Carlos P. Romulo of Camiling, Tarlac, who happened to be an editor of the paper. American-educated ‘Rommy’ was already making a name as a brilliant writer, orator and debater and he naturally balked at the idea of participating in a carnival which he considered light and trifling. At that time, he was still mourning the loss of his father. And he had a girlfriend to booth-- presenting himself with a female partner before an audience that included her girlfriend could be quite unsettling. Lastly, the thought of wearing a Roman costume and tights for the coronation mortified him. 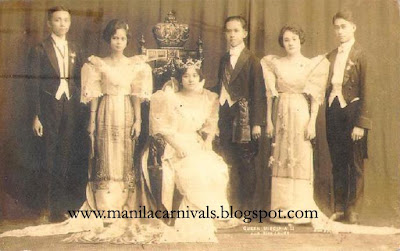 THE 1923 QUEEN AND HER COURT. Virginia's King Consort was Carlos P. Romulo.


However, Don Manuel Earnshaw, the big boss of The Herald, was stern and insistent. Romulo grudgingly complied lest he incur his anger and lose his job. At the coronation festivities, Romulo left the Queen’s side many times to dance with other partners, and it was only until the last day of the festivities that he finally asked her for a dance. 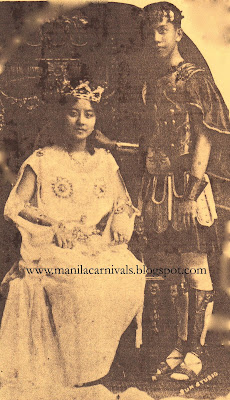 ROMMY ANG GINNY. Virginia and Carlos P. Romulo in Roman costumes. Romulo was so uncomfortable wearing the tunic and was not exactly thrilled with his escorting duties; he left his Queen to dance with other girls during the coronation ball.

Eventually, romance blossomed between the two and two years after the Carnival, on 1 July 1924, the two were married in Pagsanjan. They had four sons: Carlos Jr. (who died in a plane crash on 11 Oct. 1957), Greg, Dick and Bobby. Romulo of course, became a distinguished international diplomat and statesman (Secretary of Foreign Affairs, President of the UN General Assembly) and a Pulitzer Prize-winning author. Virginia preferred to stay in the background and only once were she and her husband separated for some time, when Romulo joined Quezon in exile during the war years in Washington.

Virginia passed away ahead of her King Consort, dying at the age of 63 on 22 January 1968. In life as in death, Virginia was recognized as “one of the greatest Filipino women of modern times”. In 1961, she was awarded a Presidential Award, acknowledging her for her “womanly virtues of a devoted wife and mother, the guardian of home and family values, and traditions and modesty.”
In a touching tribute published in a national newspaper, a journalist wrote: “What may remain forever engraved in the memory of not a few generation and of those following is the silent, sovereign grace of her life as a queen—once in a national festival, and, continuously, as a housewife and mother. Virginia Llamas Romulo was a Queen”.
Posted by Alex D.R. Castro at 8:03 PM

Thank you for your correction, which as been reflected on the edited article.

Thanks so much for this wonderful blog about my grandmother. Liana Romulo