MANILA CARNIVAL GROUNDS, 1923. Carnival parade at the Luneta, the annual venue of the biggest commercial and industrail exposition in the Philippines.

“Get the Carnival Spirit!”, was the rallying cry of the Carnival publicists for 1923, an encouragement that is hardly necessary in Manila. For with the approach of the opening day of the Carnival, by force of habit, the city changes its whole aspect and becomes a realm of fun, frolic and amusement.

This year’s Carnival pretty much kept the same ingredients that made the previous year’s edition successful.. For the 2nd year in a row, a Filipino was named as the Director General of the Carnival, Mr. Arsenio Luz who, to his credit, administered the 1922 Carnival with aplomb. He was described as a livewire and a “go-getter”, qualities needed to ensure that the big event runs smoothly, and that, more importantly, the Carnival makes both ends meet, financially. 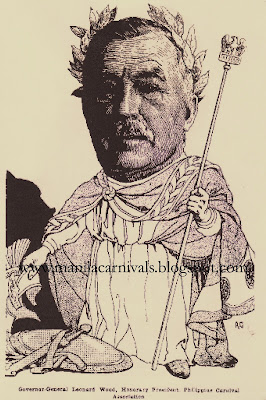 As the commercial-industrial fair was of utmost importance to businessmen, the concept of a Sample Fair, done in a special building, was retained. The nightly balls,the three parades and the military presentations were likewise kept, but the special attractions were beefed up. This year included a water circus, featuring, according to the Carnival publicity department, “some of New York’s most beautiful diving girls”. A children’s playground called Toyland, carried a profusion of toys and good things to eat. An Airplane Swing was also added so that one can enjoy all the sensations of an airplane flight safely and comfortably.

From Australia came boxing kangaroos. A “House of Ice” was the offering of San Miguel Company. Borromeo Lou returned with his vaudeville revues, and so didmany of the foreign magic acts. Films showing the Villa-Buff boxing championship and other fistic matches were screened nightly. To drive interest, a radio contest opened to amateurs was put up. The usual minor attractions were also there: popular booths that sold peanuts, popcorn, soda water, refreshments parlors and beer gardens.

Of course, highlighting the Carnival was the selection of a Carnival sovereign, a process that began three months before the actual Carnival week. The manner of selection was the same: publications ran contests to select candidates, one candidate per newspaper. Candidates were then voted for by the public, the ballots being attached to Carnival stock certificates. The trend was even keenly observed by beauty enthusiasts: for the first few carnivals, American girls were invariably chosen, but since the Filipinos have taken such an active part in the event, beautiful Filipinas have sat on the regal throne at the head of the big auditorium.

The hard work of all the officials and committees paid of, as the 1923 Carnival broke the previous year’s record in terms of stock sales and unprecedented attendance.
Posted by Alex D.R. Castro at 4:36 PM