The first ever Manila Carnival of 1908 had the distinction of having two reigning queens—Reina del Occidente and Reina del Oriente—Queen of the Occident and Queen of the Orient, chosen through the aforementioned newspaper balloting. But complications arose when charges of irregularities came to fore—with American weeklies allegedly printing more ballots than required to favor their American candidates. The National Assembly took the matters in their own hands and picked the two queens by votation. 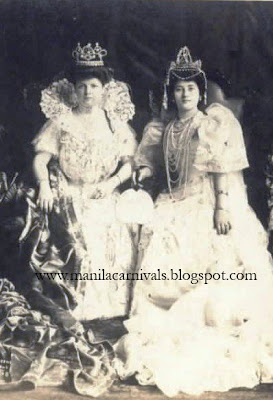 In the 1909 edition, the Occidental Queen was dropped, thus a Filipina royal reigned solo. In the quest for the 1912 muse, the title of “La Matrona de Filipinas” awaited the winner, and she was provided with an expanded royal court that included regional queens for Luzon, Visayas and Mindanao—each with a retinue of princesses and escorts.

There were to be 3 years—1910,1919, 1928—when no national Carnival was held and only one Manila Carnival did not have a Queen in 1911. In 1917, it was the turn of an American queen to reign solo, a daughter of the governor-general. To celebrate the “victory of democracy” in the 1st World War, the 1920 event was known as the Victory Carnival and once again, an Occidental and Oriental queen ruled over the festivities. The 1921 fair, on the other hand, was dubbed as the Magallanes Carnaval in observance of the 400th year anniversary of Magellan’s discovery of the Philippines. 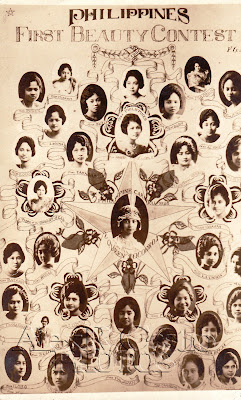 REDUX: TWO QUEENS, ONE CARNIVAL . In 1926, 2 quests were conducted--for the Carnival Queen (won by Pampanga's Socorro Henson) and the first ever Miss Philippines (Anita Noble of Batangas). It was to be the last time that the Manila Carnival Queen title was used; henceforth, all winners in the next years were named as "Miss Philippines".

In 1926, a parallel pageant—the 1st National Beauty Contest—was held alongside the Manila Carnival Queen quest. For the first time, the winner of that contest was called "Miss Philippines", a title that would be used permanently for all succeeding queens. The Carnival Queen had 2 damas while Miss Philippines had Misses Luzon, Visayas and Mindanao as part of her royal retinue. For this reason, the 1926 event was known as the Big Carnival.

It was also here that a Special Jury chose the winners, instead of public balloting to equalize the playing field, a selection process that was followed until the Carnivals' end.

In a 1928 Graphic magazine article written by Rodrigo Lim, he believed that “the most beautiful Filipina will be chosen regardless of whether she be from far away Sulu or from the slums of Tondo”. A recruitment advertisement for the 1930 Queen went so far as to proclaim that “the humblest girl from the most secluded barrio has a big chance to win the honor as the daughter of the richest hacendero”—so long as she possessed “beauty of face, perfection of form, and accomplishments”.

No matter, subsequent winners continue to come from landed families.