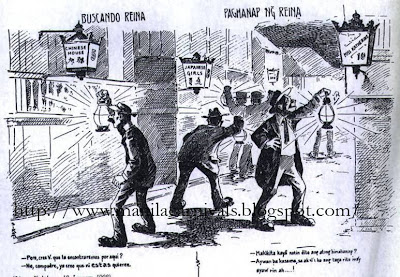 WHERE, O WHERE. The nationwide search for the Carnival Queen, often marred with controversy and unabashed enthusiasm was satirized in this political cartoon. Everyone--from town elders, municipal officials, business executivess, socio-civic clubs to provincial governors wanted a say in the royal selection.

The tremendous success of the first Manila Carnival signalled the start of a beauty tradition that was to last for over 3 decades. While it is true that the carnival shows and exhibits elicited initial interest, it was the search for the Carnival Queen that proved to be the highlight of the Carnival, entrancing crowds and attracting participation from the provinces’ most beautiful ladies. After all, to qualify as a candidate, one had to have a good standing in la alta sociedad, with impeccable breeding, character , education and personality—not to mention financial capability. 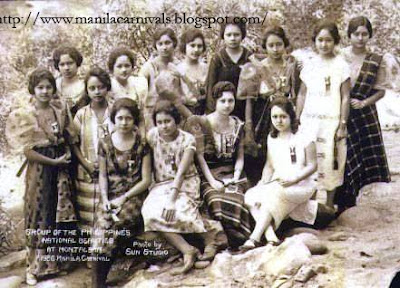 PROVINCIAL BEAUTY BETS, at the 1926 edition of the Carnival, relaunched as the 1st National Beauty Contest.

In the first years of the search for a Queen, the selection was done through public balloting. One had to subscribe to newspapers ( La Opinion, Cablenews, Bulletin, El Renacimiento, El Tiempo, La Vanguardia), put the name of the candidate of his choice on the coupon, which was then dropped in dropboxes at designated outlets. In the first carnival, ballot boxes were placed at Clarke's, Libreria Colon and Olsen's Cigar Store at Escolta, at the Agencia Editorial on Carriedo and McCullough's on Plaza Goiti. The candidate who amassed the number of votes was proclaimed the Queen of the Carnival. This selection system—of buying votes—obviously favored the more affluent contestants. 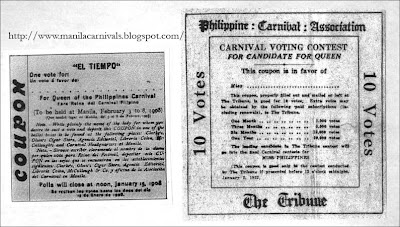 VOTE WISELY. Coupons such as these were printed on leading newspapers, to be filled with the name of the candidate, and dropped at designated outlets. This selection process was thought to have favored the more affluent contestants.

Daughters of de buena familia were recruited by provincial selection committees to run as candidates. For many, the Carnival Queen title was a passport to further their fame, fortune and social prominence. At proclamation night, the Queen was crowned with “las diademas reales” , royal rhinestone crowns, specially designed by the country’s foremost metal engraver and maker of trophies, medals, tiaras and coronas, Crispulo Zamora. 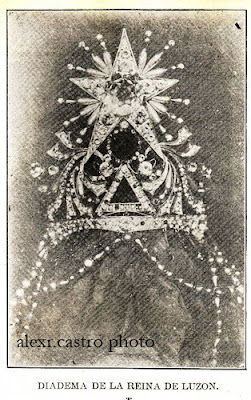 HER CROWNING GLORY. Crispulo Zamora, the leading engraver and metalsmith of the time, was commissioned to design and create the stunning crowns, medallions and trophies for Carnival winners, guests and sponsors. This gem-encrusted crown was worn by the 1912 Queen of Luzon.

For a full year, she met presidents and foreign dignitaries, was paraded, wined, dined and honored with songs. She presided as an honored guest over countless carnival ceremonials, from street parades, coronation balls, themed gala nights and masquerade shows, many theatrical in nature. Her presence in these affairs always drew adoring crowds who shouted her name as she passed by. Past winners and contestants became lawyers, writers, diplomats, actresses, wives of statesmen and one even became a First Lady.
Posted by Alex D.R. Castro at 5:10 PM