3. OH, MEET ME AT THE CARNIVAL

Oh meet me at Manila
Beside the dreamy bay
Meet me at the Carnival
Manila, U.S.A.
For there you’ll find the coconut
The mango and bamboo
And there upon the Malecon
I’ll wait and watch for you
- from an old Manila postcard 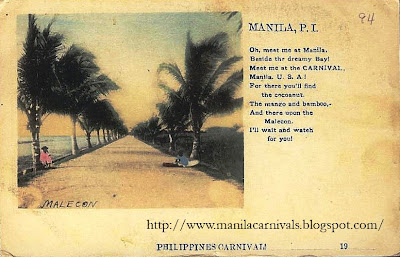 MERRYMAKING IN MANILA, U.S.A!. An old postcard invites every one to go to the Carnival in Luneta through a leisurely walk down Malecon Drive.

On 27 February 1908, the four gates of the 1st ever Manila Carnival were flung wide open. The site was the Wallace Field in Luneta and Bagumbayan, whose perimeters were walled up with Pampanga sawali, “isang umunat ang taas”. The area was strung with lights, arches and blue and yellow banderitas. Entrance tickets were sold at the taquillas, at 20 centavos each. 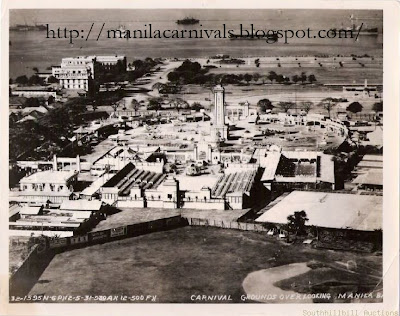 CARNIVAL GROUNDS, at the Wallace Field in Bagumbayan or Luneta. 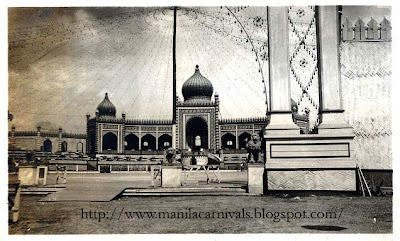 WALLED IN SAWALI. The carnival site was ringed with Pampanga sawali and the grounds were festooned with fiesta flaglets, posters and strung with miles of brilliant electric lights.

Once inside, the visitor is treated to even more dazzling array of electric lights and Carnival colors. The fair was marked with theatrical shows, masquerade balls, band competitions, sports fests and extravagant float parades sponsored by big commercial establishments, provincial governments and local agencies. Provinces vied for attention and awards with their attractive booths that displayed their arts, crafts, agricultural and industrial produce. The pavilions of Laguna and Bulakan were singled out for their attractive decorations while that of Cavite was deemed, “not inviting”. Iloilo showcased its fruits while Albay replicated its famous Mayon Volcano, made from abaca fiber. The booth of Cebu was decorated as the Pearl of the South, guarded by a figure of Magellan. 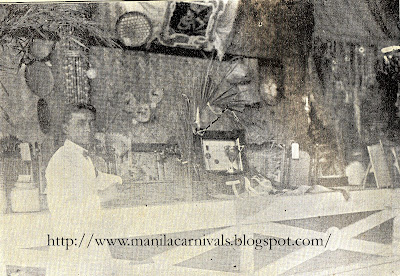 SHOWCASING PAMPANGA'S BEST. Provincial booths were set up, each showcasing the native produce and the best in arts and crafts.

Private enterprises also showed off their wares. There were shoes by Adelanto de Siglo , hats by Vicente Liwanag and buttons by La Concha. Mr. Roces of Paete had furniture of narra beautifully varnished, while Messrs. Braulio Feliciano and Sousi offered nata de pina and Jarcias.

SPRUNGLI & CO., makers of Bear Brand Milk, supported the Carnival by contributing a decorated float to the annual float competition.

Even government agencies did a bit of breastbeating by setting up booths of its various bureaus like Public Works, Navigation, Forestry and Commerce, that flaunted their achievements. The Bureau of Science, for instance, showed silkworms, different kinds of wood and minerals. Foreign countries like Japan and China sent delegations to show off the richness of their culture with their commercial booths while the United States strutted its mighty stuff with military drills and naval shows. Even the great battle between the naval squadrons of America and Spain in 1898 was recreated. 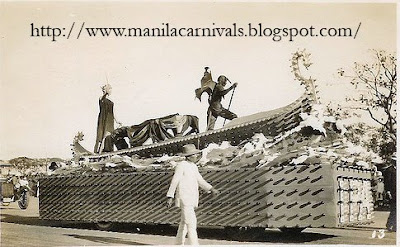 A GOVERNMENT BUREAU FLOAT makes its beautiful presence felt in the traditional parade of floats, that also featured those of various government agencies.

Meanwhile, people from nearby provinces filled the venue every week-end to watch imported circus acts, thrill to exciting rides, sports competitions, firework displays and partake in the maskings, sports spectacles and interesting trade exhibits sponsored by the Bureau of Education. 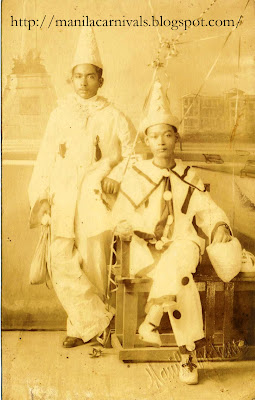 MASKED REVELERS, like these carnival participants dressed as "payasos" or clowns, walked the carnival grounds and contributed to the merrymaking. Prizes were given to the most spectacular costumes.

A Hippodrome accommodated paraders that included cowboys, cavalry men , Indians, clowns and artists. Filipino aerialists, recently arrived from the United States, performed to the crowd’s delight. The highlight was a death-defying act where a lady descended from a height of 50 feet to the floor—held only by the hair.

Music and street amusement continued no end, attracting hordes of people “as thick as ants”. The gaiety and magic promised something extraordinary in one’s monotonous life. But, if one were to define and single out the fair’s lasting and singular highlight—it has got to be the nationwide quest for las Reinas del Carnaval—the Queens of the Carnival—who, just by their mere presence, inspired awe and excitement, mesmerized crowds and captivated a whole country by their allure and achievements.