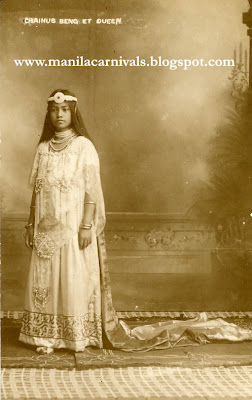 Eveline Chainus Guirey was the eldest of 10 children of Guirey, a Benguet baknang (well-to-do man, equivalent to an English country squire) and Dakalay , an Igorot who also went by her Christian name, Flora Pacalso. Born in 1902 in Gumatdang, Itogon, Chainus was schooled by missionaries at the Bua Public School near Baguio.

She was just 13 when she was elected Queen of the Benguet Carnival, becoming the fair's major attraction and drawing crowds of up to 8,000 people. With long straight hair, a morena complexion and a regal bearing, petite Chainus captivated Benguet with her every appearance, whether dressed in her native costume of green and purple silk or in a Western gown with a long gauze train. On her head was a unique tiara made of copper and silver plates with a precious ruby stone set at the center. 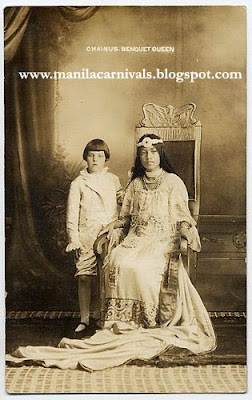 As part of her royal duties, Chainus was invited to go to the Manila Carnival with her court, and her presence elicited even more buzz what with their exotic mountain dresses and personal adornments. In appreciation, the Philippine Carnival Association gifted her with a silver tea set. 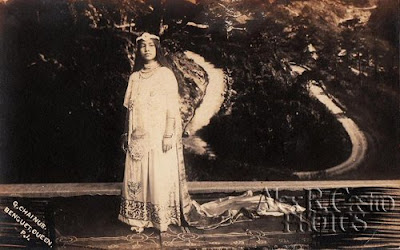 After her graduation from Bua, Chainus was handpicked by the school director Mrs. Alice Kelly, to go Manila to take up education at Philippine Normal School and later, a nursing course at St. Luke's Hospital. But she contracted turberculosis from which she never recovered. She died with Episcopal Bishop Florencio Mosher by her side. Schools were closed, classes were suspended and a large crowd--including VIPs like Mayor E. J. Halsema, Mt. Province Gov. Luna, Vice Gov. de Guzman, Chief of Police Joseph Keith and Jim Wright of the Trinidad School Farm attended her funeral on Oct. 5, 1920, which was pre-faced by a requiem mass. She was just 18 years old.

A decade later, J.J. Murphy established a motion picture theater along Session Rd. and named it Alhamar-Chainus, in her memory. Contrary to a popular belief, Chainus is not the subject of a statue of a Benguet girl that stands in the Italian Garden of Camp John Hay, erected long before her death.
Posted by Alex D.R. Castro at 4:15 PM

Thank you for writing about her. I am from Benguet (an Igorota)... This is another story we can share back home ;-)

Thanks for dropping by. I went to school in Baguio myself and some members of my family have gone to settle there.