The Manila Carnival fever caught on not only in the provinces of Luzon but also in the cities down South—cascading down to Cebu which led the way in staging the most opulent spectacles outside of Manila. If Manila had Wallace Field as the venue, Fuente Osmeña was the original site of the Cebu carnival events. The carnival season in the Queen City of the South, it was said, rivalled those of Manila in terms of pageantry and presentation, and the royals who reigned over the festivities were no less beautiful and accomplished than the national winners. 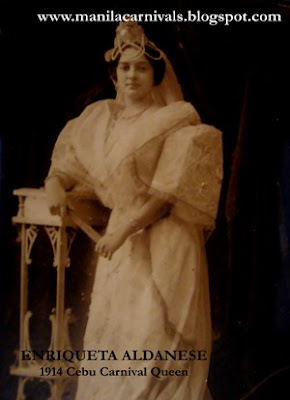 1914, ENRIQUETA ALDANESE y LASSO DI VEGA
The 1st ever Carnival in Cebu was held 6 years after the national Carnival. The winner, Enriqueta Aldanese belonged to the prominent Aldanese family from Sibonga, Cebu. She had also been the Dia del Español Queen (Spanish Day Queen) for that year. Later, in 1918, Enriqueta bagged the Manila Carnival Queen title, an even bigger honor that made her into a national figure. She eventually became the wife of Don Jose Paris, an engineer. 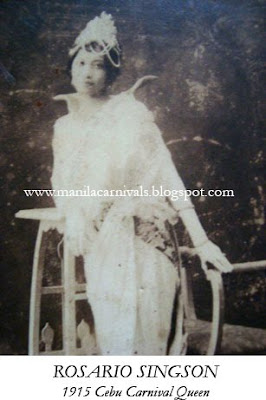 1917, BASILISA ABAD
The second Cebu Carnival was held in 1917 and a beauty from Barili, Basilisa Abad, was chosen as Queen. She married a certain Dr. Atenzo and settled in Mindanao with her children.

1918, ROSARIO LLAMAS
Another Spanish mestiza from Parian was the winner of the 1918 Cebu Carnival crown—Rosario Llamas.

1923, ANGELES CLIMACO y OSMEÑA
Angeles Climaco was the last queen to be crowned at Fuente Osmeña, the original site of the Cebu Carnivals. “Angeling” was the daughter of Don Arsenio Climaco, the provincial governor, and her mother was Dna. Juanita Osmeña. At her coronation, she was escorted by Nick Osmeña, eldest son of then National Assembly Speaker Sergio Osmeña, who was an active participant of the Manila Carnivals. Catalina Apacible, also that year’s Manila Carnival Queen winner, lent her crown for her to wear. Nene was then more than a dear friend of Perico Limjap, Sergio Osmeña’s brother-in-law, and would shortly become her husband. Angeles married Dr. Ildefonso Ubud, whom she outlived.


1925, CECILIA MICHAEL
Angelic-faced Cecilia Michael was the queen-elect of the 1925 Cebu Carnival and was escorted by Francisco Racaza. She later married Rafael Ramos.


1927, ENCARNACION LIVIOCO
The 1927 winner , fondly called Encarnita, practically grew up in Manila and was the daughter of the Cebu provincial treasurer. Her consort was Victorino Climaco, the younger brother of Queen Angeles, and a pharmacist by profession.


1930, MARIA CONSUELO CABASA
In 1930, Jose Nolasco, the Director-General of the Cebu Carnival, lauched a city-wide search for the next queen. All the districts of Cebu fielded a delegate, making the contest more competitive. In the end, it was Ma. Consuelo Cabasa, daughter of Mr. and Mrs. Juan Cabasa of Pasil district, who emerged victorious in the most spectacular edition of the carnival pageant. Her damas included: Maria del Mar (Parian) and Remedios Manlunas (Sambag). Consuelo, escorted by Paciano Reyes, had the distinction of being crowned by the 1930 Miss Philippines and her namesake, Monina Consuelo Acuña. She later became the bride of Capt. Gallardo of Bohol, but the couple remained childless.


In that same carnival, another beauty was named “Bito-on sa Babaye”—Rita V. Pañares, daughter of Bartolome Pañares and Manuela Villaflor of Barli. Rita was a valedictorian of her elementary and high school classes at Colegio dela Immaculada Concepcion At the University of the Philippines, she was a champion debater together with the 1929 Miss Philippines, Pacita delos Reyes. She married a UP professor, Atty. Alvarez.
Posted by Alex D.R. Castro at 5:50 PM

too bad we do not hear the Aldanese name in Sibonga anymore, not to my knowledge

My mother's sister, Rita Villaflor Panares Alvarez, 1931 Cebu Carnival Queen, has a life size picture of the event. It is housed in the Panares ancestral home in Barili Cebu still in its fantastic ornate frame. It represents the opulence of the time.

Thankfully we have beautiful pictures that serve to remind us of those fabled times.