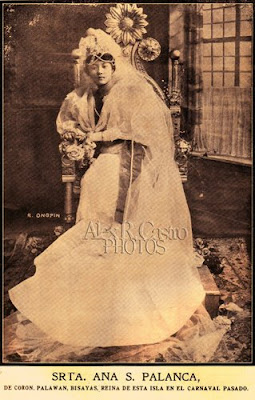 Anita Sandoval Palanca comes from the Sandoval family of Coron, Palawan and Iloilo. She was only 15 and a student of Sta. Catalina College in Manila when she was crowned 'Reyna ng Visayas 1913'.  She eventually married Dr. Guillermo Fernandez from Dagupan, Pangasinan, a doctor working in Culion. They had 3 children: Guillermo Jr.--better known as the late interior designer, Wili Fernandez who married award-winning author Doreen Gamboa; Vicente, who became a municipal secretary of Coron (married to Rebecca Dabuit) and Francisco (a farmer, married to Leticia). Mrs. Palanca-Fernandez spent most of her life in Coron, Palawan.
Posted by Alex D.R. Castro at 4:34 PM