Information is scarce about the staging of the 1910 Manila Carnival, leading many to believe that no Carnival was held in that year. In fact, “The Beauty Book”, the pioneering ‘80s book on Philippine beauties authored by Doris Nuyda affirms this. However, “The Philippine Islands, Book II”, written by Governor-General William Cameron Forbes, noted the holding of an exhibition in 1910, riding on the crest of the Manila Carnival:

“In 1910, the government took advantage of the popular gathering at Carnival time, to establish an industrial exhibition which was held on land adjacent to, but outside the carnival grounds. Merchants arranged alluring displays of their wares, provinces vied with each other in making creditable exhibits, and the Bureau of Education displayed the work of trade schools and the produce of the agricultural schools.

Other bureaus of the government, such as Agriculture, Forestry, Navigation, Public Works, Printing and the Weather Bureau made exhibits to inform the public of the work that was being done for them by their government and the manner in which the money derived from the taxation was being used for their benefit. The whole movement was highly popular with the Filipinos and aroused much favorable editorial comment in both the American and Filipino papers.”

Similarly, the book, “Colonial Pathology” by Warwick Anderson, points out that “the most significant aspect of the Carnival of 1910 was the presence of soldiers who mounted troop parades and military drills. Upon reviewing the 8,000 troops, W. Cameron Forbes was moved to write the Secretary of War. “The military processions turned out to be a beautiful affair”, Forbes declared, “ beautifully carried out, and I think most opportune!”.

Whether what was held in 1910 was a Carnival or an Industrial Exhibition, it still was obviously a grand, high-profile event that aroused national interest. Further research is needed to make a definite conclusion as to the exact nature of the 1910 spectacle.

UPDATE:
Recently, this 1910 Philippine Carnival Program came to my possession, irrefutable proof that indeed, there was a 1910 Carnival edition--held in Manila from Feb. 5-14.: 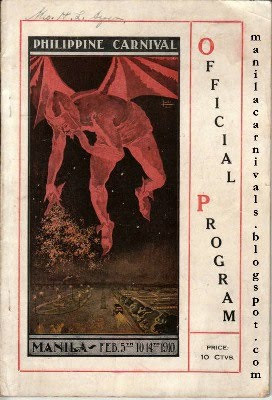 Hi! Alex I believe you're right when you said that the 1910 Manila Carnival really exist. I have in my possesion a small piece of admission ticket to the 1910 Manila Carnival that belongs to my great-grandfather, Andres Giongco, former mayor of Rosario, Cavite(1922-1925)and Noveleta, Cavite(1910-1912).The ticket has a handwritten note: Andres Giongco Not Transferable. The card also says: THE PHILIPPINE CARNIVAL ASSOCIATION 1910, Inaugural Ball February 7th at 9 p.m., The ticket admits one lady and one gentleman, and must be presented at the door. It also has a Stock Certificate No: 0581. The Manila Carnival of 1910 do really exist.

Thanks Adrian. This further confirms the holding of a 1910 carnival. You have a treasured memento in your hands!