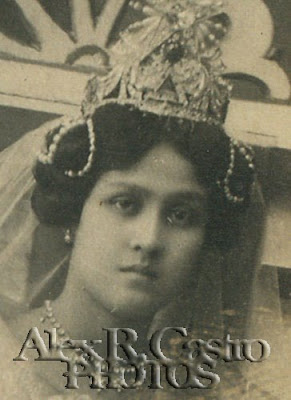 1913 MANILA CARNIVAL QUEEN OF LUZON, Julia Arceo y Otero of Batangas, one of the most beautiful but tragic figures ever to animate the annual Philippine carnivals.

1913 saw the introduction of another innovation in the annual Manila Carnivals. Three beauties of equal rank, representing the major regions of the Philippines were chosen, instead of one supreme royal: Reina de Luzon, Visayas and Mindanao. But still, most attention from the press and the crowds gravitated towards the Queen of Luzon, who was unofficially tagged as the Queen of the 1913 Manila Carnival.

THE YOUNG JULIA. A budding beauty at the Colegio de la Concordia.

Julia Arceo y Otero had a life of extremes—she was the unica hija of Sixto Arceo and Maria Otero of Batangas, who, despite their modest station in life, managed to give Julia a good education at the Colegio de la Concordia. Her father, an officer of the Manila Railroad Company in Tutuban, doted on her, often using the budding beauty as a subject for his photography hobby.

HER FATHER'S DAUGHTER. Railroad executive Sixto Arceo dabbled in photography, and he would often use his daughter as a willing subject.

It was in her school that the 18 year old Julia attracted the attention of the organizers of the Carnival. They overlooked her humble background (relative to her more socially-privileged predecessors) and elected her as the Queen of Luzon on the basis of sheer beauty. er co-winners were Ana Palanca (Queen of the Visayas) and Inocencia Cabato (Queen of Mindanao).

OFFICIAL PICTURE OF LUZON'S QUEEN, as Julia appeared on the cover of El Renacimineto in her coronation finery. She wears a fabulous tiara made by Crispulo Zamora.

It was Queen Julia II however, who took center stage at the coronation rites, radiant in an elegant terno and crowned with sunburst-topped tiara designed by Crispulo Zamora. Indeed, Julia’s reign as a carnival queen was a joyous moment in her young life, basking in the limelight and catching the attention of a number of admirers.

CROWN ONA CLOWN. julia donned this costume of a French pierrot--an iconic symbol of the carnival--shortly after the coronation rites.

Among these was a handsome Capizeno, Vicente Villaruz, a pharmacist-chemist whom she married in 1915. Julia’s life of sorrow began soon after she and Vicente begot three sons. The youngest died when Julia accidentally fed him formula made from powdered medicine, instead of milk—an irrevocable mistake that haunted the mother no end. She sank into a deep depression.

In time, Vicente, too passed away, leaving Julia to fend for his remaining kids. But, despite her mental state, she soon found new love in his late husband’s friend--Jose de la Cuesta, also a fellow-pharmacist from Sarrat, Ilocos Norte. Perhaps to leave her painful past behind, the couple moved to Laoag to start life anew and to bear more children. They were to have two daughters and 4 more sons.

Grief continued to haunt Julia, as her first daughter died, followed by her husband. Her in-laws took over the raising of her children and another kind relative took her to live with her in her Quiapo house. No sooner had she settled when a fire engulfed her relative’s home which nearly killed her.

HER CROWNING ACHIEVEMENT. Julia's official coronation pictures as captured by the leading salon photographers of her time.

As a result, Julia’s nervous breakdown grew worse, a progressive condition from which she never recovered. She retreated to herself, often crying, dazed and lost in tears. Her last years were spent with sons Jose de la Cuesta and Martin de la Cuesta at a house in Blumentritt, Sta. Cruz, Manila, finding peace and comfort from years of personal agonies on 18 November 1975.
Posted by Alex D.R. Castro at 4:20 PM