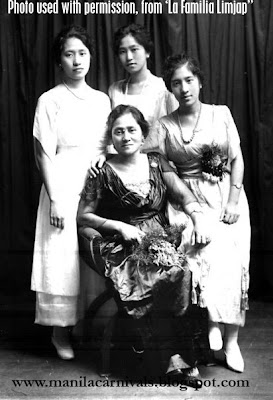 LEONARDA LIMJAP, the first 'Reina del Oriente' of the 1908 Manila Carnival, abdicated her throne in favor of a family trip to Japan. Here, she stands on the fair left, together with sister Esperanza (middle, future wife of Pres. Sergio Osmena). Seated is her mother, Maria Limjap.

To ensure that only “quality” candidates signed up for the queenship of the first Manila Carnival, W. Cameron Forbes began approaching prominent pater familias with daughters of suitable age. One such person he met was Don Mariano Limjap, an immensely affluent Chinese-Filipino businessman from Legaspi who helped finance the Revolution. Forbes persuaded the patriot to allow one of his daughters– the accomplished Leonarda Limjap--to participate in the Carnival, but the Don replied that “he did not want to be talked about”. 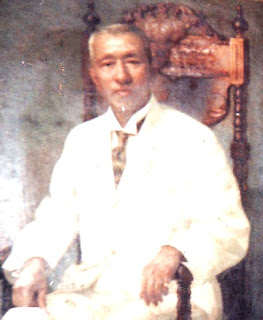 With or without his permission, Leonarda’s candidacy was announced in the papers, and the votes she amassed were a testament to her popularity and influence, with many answering the call to “rally to her beauty, dignity and patriotism”. Only 17 years old, Nena finished high school at the Assumption College and became a pupil of the arts. She studied painting under Fabian de la Rosa and piano under Dna. Ventura Galvez. Likewise, she excelled in the sports of tennis and fencing. A well-travelled girl, Nena has journeyed to Europe in the company of her governess, covering Paris, London, Rome Madrid and other major European cities. It was also her dream to visit all the islands of the Philippines to know her country better.

With sterling credentials such as these, it was no wonder that Nena led Filipina candidates all the way in the quest for the Oriental Queen title. But in the midst of the newspaper scandal, the voting was suspended and instead, the final selection process was thrust in the hands of the members of the Philippine Assembly.

On 13 January 1908, the Philippine Assembly cast their votes and of the 69 votes tallied, 39 were in favor of Leonarda Limjap, beating other distinguished ladies like Purita Villanueva, Carmen Francia, Dolores de Morio, Paz Yangko and Inocencia Reyes. Leonarda Limjap had won the 1908 Reina del Oriente crown of the 1st ever Manila Carnival. The newspapers rushed to print her sensational victory and congratulatory accolades pured in. “We congratulate her sincerely”, the leading newspaper El Renacimiento proclaimed, “the Assembly chose a worthy queen to wear the crown of the Queen of the Orient”.

But alas, hardly had the ink on the papers dried out when Nena shocked the Carnival Committee and the Philippine Assembly that had chosen her by renouncing the honor and declining the queenship. Her reason was that she was traveling to Japan for a month in the company of Mr. Regidor and his daughter and further expressed that “she does not want to miss the opportunity to travel in the company of such a nice family”.

THE ROLE OF THE 1st RUNNER UP IS VERY IMPORTANT. The Queen of Iloilo took over the throne and the title refused by Leonarda Limjap who cited a trip to Japan as her reason. Pura Villanueva had consistently ranked 2nd after Leonarda in the counting.

With just a few days to go before the opening of the Carnival, the title was offered to the reigning Queen of Iloilo who had placed a strong second to Leonarda: Purita Villanueva. A telegram was quickly dispatched to Iloilo, but Pura initially declined the proposal, preferring to represent her province. A day later, she relented and accepted her appointment with grace.

Many thanks to Mr. Joey Tirona, grandson of Leonarda Limjap, for the use of the Limjap family photo. Likewise to Mr. Raul Boncan)

Thank you very much, Alex. You certainly have a very interesting blog. I am a history buff and a teacher myself and I love reading all your posts.

I hope you can also write about Susan Magalona. She was a legendary beauty and it'd be nice to know more about her.

I also enjoyed looking at the pictures you posted on Flicker.

Again, thanks a lot for sharing this with us.

bugsybee>>You are most welcome. And thank you for dropping by. Yes, I have some materials about Susan Magalona, a great beauty in her time.
mr.philippines>>i owe the growth of my carnival collection to you and to you alone!

Thank you for posting this. I am Leonarda Limjap's great-grandaughter and I never knew anything about her before reading this. Now I just want to find more and more about her....

Thanks, c*mango. I have been on the look-out for your great grandmother's photo. Would you have one? She must have been a real beauty.

Hi Alex, Jerome here, cousin of c*mango and nephew of Joey Tirona. Thanks for the nice article on our grandmother's mom.

Thanks for dropping Jerome, as well as for your kind words.

I witness "Ang Unang Reyna" brought me here. ang galing! thank u for this.