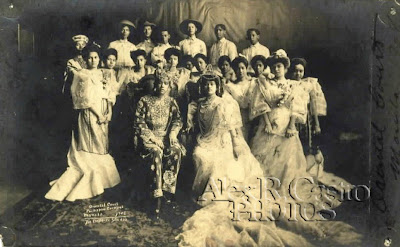 A ROYAL GATHERING. The King and Queens of the Orient with their corte de honor.

With her retinue, she must have been a sight to behold. Newspaper coverages of the Carnival recorded the atmosphere upon her entrance: “ The people were delirious with joy, shouting, “Mabuhay!. Ceaseless clappings, specially for the Queen of the Orient, a fresh flower of the Filipino plant, She was standing up and happily greeting the joyful people. Dressed beautiful and maringal, because she was dressed in the native dress, “bagay sa kahinhinan ng maysuot!’ Most becoming the wearer. Wherever she want, she received acclaim. Everyone admired her beauty, and, to the last minute of her passage down the field, there was endless clapping of hands..”.

Pura turned out to be a perfect Queen for Manila’s first carnival, holding her own against her co-royal. Indeed, as the Carnival came to an end, her newspaper, El Tiempo, concluded: “She was a real enchanting Queen. If she can occupy the throne of the Carnival, she can also that of a nation. Because of her simpatico aspect, she takes with her the love and affection of all her subjects..” 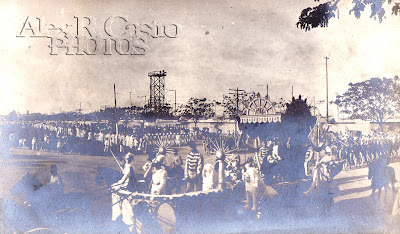 ROYAL FLOAT AT THE LUNETA. One of the floats bearing the 1908 royalties of the Manila Carnival wends its way around Wallace Field as an adoring audience waved, clapped and shouted, "Mabuhay!"

With the Carnival now behind her, Pura continued on with her social activities. Friendship had grown between her and El Renacimiento editor Teodoro Kalaw of Batangas after their first meeting at a 1907 event at the Centro Escolar de Senoritas. Pura had been an invited lecturer there, and Teodoro found himself smitten by the Ilongga beauty. But the Manila Carnival had intervened before anything could happen. However, his courtship resumed and two years after, on 6 May 1910, Pura Villanueva and Teodoro Kalaw were wed in simple rites at the Molo Church.

After their wedding, the two moved to Lipa, hometown of Teodoro, and finally to Manila, where they settled to raise their fine family: Maria (herself, a Carnival Queen in 1931 and a future Senator), Teodoro Jr. (husband of senator Eva Estrada), Purita (Mrs. Rafael Ledesma) and Evelina (Mrs. Aaron Pines). 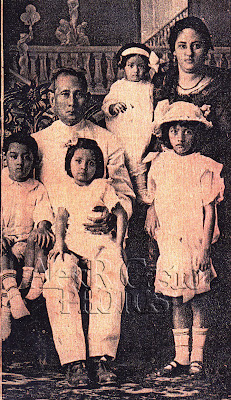 STILL QUEEN OF THE HOUSE. Pura, in her later years, with husband, Teodoro Kalaw and 4 children: Maria (future Carnival Queen of 1931), Teodoro Jr., Purita and Evelina.

Pura turned out to be a supportive wife to Teodoro in his multi-facetted career as a journalist and as a government executive (Secretary of Interior, Director of National Library, Chairman of the Commission on Philippine Independence.) With her real estate investments, she also established a successful business on her own. Pura’s advocacies too, are legendary. She engaged in many socio-civic activities, founded a school, became a woman’s suffrage champion and earned a Presidential Award of Merit from Pres. Elpidio Quirino in 1951.

The most accomplished woman ever to emerge from the Manila Carnivals—“pioneer for women’s political and property rights, writer, beauty queen, businesswoman, exemplary wife and mother”--passed away on 21 March 1954, aged 67.
Posted by Alex D.R. Castro at 4:37 PM