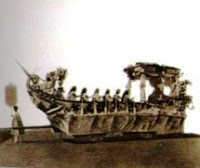 One of the most spectacular ceremonials conceived for the 1908 Carnival was the meeting of the Occidental and the Oriental Queen on the bay of Manila, a "cadena-de-amor" maritime procession meant to symbolize the eternal friendship of two Continents. In the well-choreographed event, royal barges bearing the queens were to arrive simultaneously at the Luneta, to be welcomed in the grandest of styles. 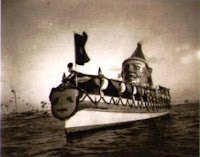 The grand plan was laid out to include a ceremonial boat for the use of the Occidental King, a 15th century "carebela” type, while that of the Oriental King was of Indo-Chinese style. Each will have a throne, where the King will be surrounded by his Court, followed by the beautiful Queens of the Carnival and their courts. The boats will be escorted by decorated launches.

An eyewitness account records the fantastic fluvial pageant of 27 February 1908: “It was about 4:30 o’clock when the King and Queen of the Occident occupied their throne on the stern of the royal barge and gave order for the procession to start. The boat was towed by the launch Isabel. The constabulary band was stationed in the bow of the royal barge and the 9th cavalry trumpeters on the launch.”

The boat left with its distinguished guests on board, trailed by artistically-decorated launches simulating whales, clown heads, pelican and marine creatures. At the entrance of the breakwater, the ritual meeting of royalties happened. This was followed by a display of fireworks, boat whistles and salvos from battleships and the wild acclamations of the people. Then, all proceeded to the landing, where our account continued. 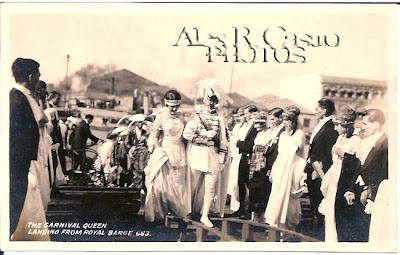 HAPPY LANDING. Queen of the Occident, Marjorie Colton, alighting from the royal barge, welcomed by her royal entourage.

“Thousands of surging humanity crowded along the edge of the Luneta fill, the banks of the inner basin where the landing was o be made, and along the road leading to the Legaspi landing, to get a glimpse of the royal party. Never before had so many people gathered together in this city on any occasion and while it is impossible to state the exact number of people who were on the Luneta and the new-made land, a conservative estimate would be from 80,000 to 100,000”.

The royalties arrived a few minutes after 6 at the pier, where they were received by the Carnival Committee composed of Mayor W.W. Brown, Judge Gilbert, Dr. Reno, Dr. Guerney, Capt. Weigl and Mr. Nolting. 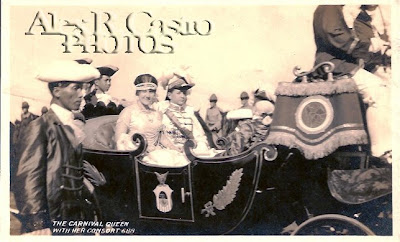 The two royal couples were escorted to automobiles which were awaiting their arrival and the procession then started for the grandstand on the Luneta. The court rode in stately carriages. During this trip, bright lights were focused on the entire entourage. The Queens stood up in their cars to acknowledge the cheers of the spectators. “Everything looked fairy land, decorations, lights, people, everything.”, a newspaper reported.

At the grandstand fronting the Legazpi Monument, the keys of the City of Manila were given by the Mayor to the foreigners. From there, amidst the sound of trumpets of cavalrymen, the courts filed past to go to their fancy palaces, to meet again at Elks Club and then to the Carnival Hippodrome to start the national ball.