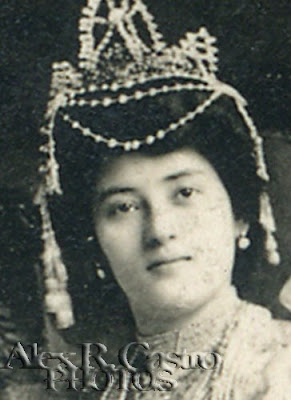 REINA DEL ORIENTE 1908. Pura Villanueva y Garcia, of Molo, Iloilo at her coronation. A Filipino-Spanish mestiza, Pura was known for her literary works in Spanish before she was invited to participate in the carnival queen quest.

Pura Villanueva was already acclaimed as a ‘beauty with brains’ even before she became a Carnival candidate. In her hometown, Molo in Iloilo, she had established herself as a Spanish writer of repute for El Tiempo, a leading newspaper. Here, she contributed literary articles and insightful essays, mostly on feminine issues. She was also the founder of the Asociacion Femenista Ilonga, a woman’s group. When the first Carnival needed a queen, Carnival officials immediately enlisted her. 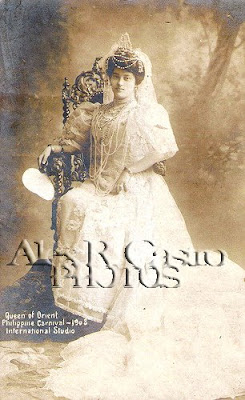 HER ROYAL VESTMENTS. As she appeared in her official portrait sitting, dressed in a "panuelo-less" costume designed and executed by her Spanish mother, Emilia Garcia. She holds Japanese fan to symbolize her queenship of the Orient.

Pura was born on 27 August 1886 to lawyer Emilio Villanueva and Emilia Garcia—a Spanish girl from Palencia. Emilio had met the 15 year old girl while a student of the University of Salamanca, freely associating with expatriated Filipinos like Graciano Lopez Jaena, Marcelo H. Del Pilar and Jose Rizal. The couple went back to the Philippines to start and raise a family. They were to have two daughters, the elder Maria and Pura, or Purita.

As a youngster, Pura enrolled at the local school for girls founded by Maestra Vitang and then went became an intern at the Sta. Catalina College in Manila. Purita stood out with not only because she was amestizada, fair and tall, but also because she had a strong personality, never timid or modest , was the manner of ladies then. By the time she was 18, she was the toast of Iloilo’s social set, known for her incisive write-ups as a social reporter for the local daily. 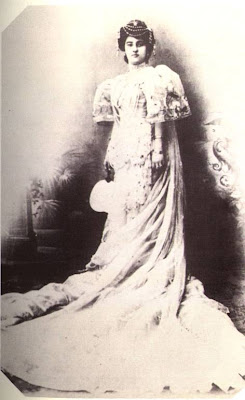 CROWNED FOR THE CARNAVAL. Another picture of Pura resplendent in her coronation attire. From the book, "LEGACY, Pura Villanueva Kalaw: Her Times, Life and Works 1886-1954, by Maria Kalaw Katigbak. Publisher: Filipinas Foundation, Inc. (c) 1983.

Her elevation to the Queenship was fraught with complications, as discussed earlier, but when Pura finally made up her mind to accept the offer of taking over the vacated throne, she did so with a firm commitment . “I am very happy that I have been chosen Queen of the Orient”, she said when asked for a message to the people of Manila. “I shall try to perform my duties in a way that shall please everyone”. 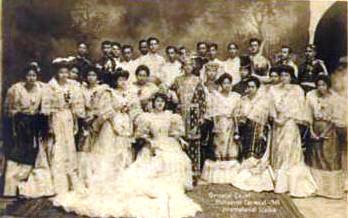 DAMAS Y CABALLEROS. Pura's court of honor included a dozen or so ladies and swains of prominence who accompanied her at her official functions. She was escorted by King of the Orient Manuel Gomez, an executive of La Germinal Cigar Factory who was dressed as a maharajah. 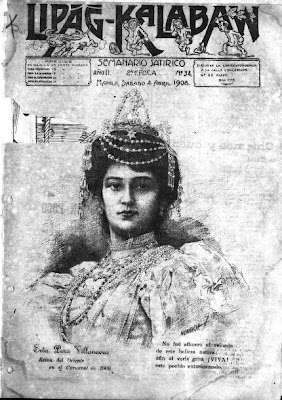 COVER GIRL. Queen Pura, on the cover of a popular local newspaper, Lipang Kalabaw. The papers had a heyday reporting the on-goings of the Carnival.

It was reported that the Queen of the Orient “will be dressed in a red mestiza dress of native material, with veil and crown, and decorations of natural flowers”. Instead, for her coronation, Pura wore a native costume made by her own mother—minus the panuelo. It was made of piña cloth and fine sinamay gauze, then hand embroidered. Instead of an ostrich feather fan, she held a Japanese fan to highlight her sovereignty over the Orient. 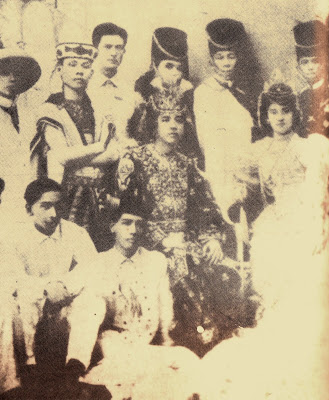 ROYAL PAIR. The King and Queen of the Orient, surrounded by a retinue of princes, just part of a royal court that numbered all of 24!

Pura created quite a sensation when she arrived at the grandstand. An eyewitness report published on El Renacimiento enthused: “The Queen of the Orient, standing up in her car, and waving her handkerchief in answer to the enthusiastic cries of the crowd delirious with joy, was easily the most simpatico figure of the royal cavalcade. Dignified without descending from her rank..she had in her the beautiful amalgam mixture of the aristocratic and of the affectionate towards her people”.

Alongside the august King of the Orient who was arrayed as an Indian Maharajah in blue velvet, Pura, the Queen of the Orient “carried the recopilacion of all Oriental dresses, luxuriously costumed, beautiful and resplendent in her dignity..”
Posted by Alex D.R. Castro at 1:57 AM