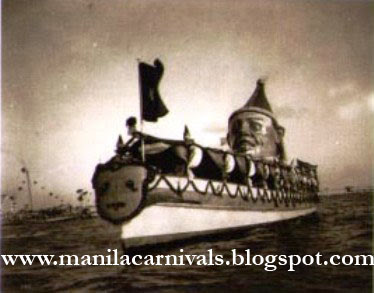 CARNIVAL IN THE PHILIPPINES
The Philippine carnival, originated by Americans in Manila, is one of the biggest and most entertaining annual shows in the Orient. Interesting exhibits from all over the archipelago, from China, Japan, Siam, Singapore, the Federated Malay States, the Straits Settlements, and other surrounding countries, are shown while magnificent land and water parades, athletic tournaments and field sports, add to the amusement of the visiting throngs. The accompanying photos of certain features of the carnival are typical of the islands’ festival of fun.

NEW VEHICLE KNOWN AS THE ‘MULOMOBILE’.
Freak device of an army officer for fun-making at a carnival recently held in Manila.
The first shows Captain George T. Langhorne, U.S.A., one of the original promoters of the carnival, in his ingeniously contrived ‘mulomobile’, where it cannot be said the cart is before the horse. 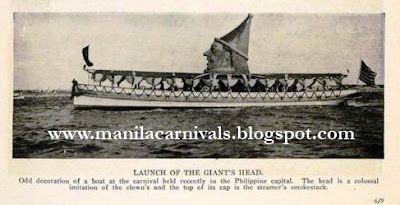 LAUNCH OF THE GIANT’S HEAD.
Odd decoration of a boat at the carnival held recently in the Philippine capital. The head is a colossal imitation of the clown’s and the top of its cap is the steamer’s smokestack.
The decorated, grotesque-appearing launch shown in the second illustration is the creation of one of the foreign colonies of Manila, and was designed to take part in the water parade, which was one of the striking features of the carnival.

The giant head surmounting the boat’s awning was placed immediately over the smoke-stack, the cap having an opening in the top for the smoke to pass out. The effect was of course very curious and the vessel quite naturally attracted its full share of attention as it took its part proudly in the pompous pageant.
Posted by Alex D.R. Castro at 6:57 PM