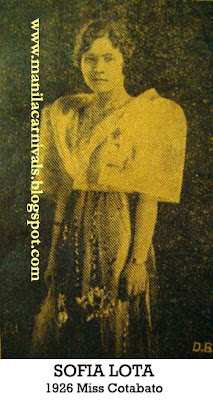 SOFIA'S CHOICE. Sofia Lota, 'an exotic find from the untamed regions of Cotabato", assuming a film star pose in 1926.

One of the most daring beauties ever to grace the Manila Carnival was a woman who went by the formidable name Sofia Lota Rinagandu Magadi Sinambel Malibutang. Surprisingly, she came all the way from Cotabato, where religious conservatism was held in esteem. When she came to Manila, she was touted as a “Muslim with royal blood in her veins” and her bio-data likewise listed her accomplishments: a dancing girl, a former nursing student, and a school teacher.

Sofia’s name and picture, however, does not appear in the omnibus photo of the Manila Carnival contestants issued in 1926. Whether she competed or not, Sofia Lota (or Lotta), billed as “an exotic find from the untamed regions of Cotabato”, went on to becomea nationally famous personality when she joined the movies shortly after the Carnival of 1926.

She, along with other candidates, had been invited by Vicente Salumbides, the American-trained actor and director, to drop by at his studio. He was in the process of casting new faces for the movie projects he had been lining up for production. Sure enough, the beautiful Sofia caught the eye of the director, who cast her in his 1927 movie, Fate or Consequence with Gregorio Fernandez. 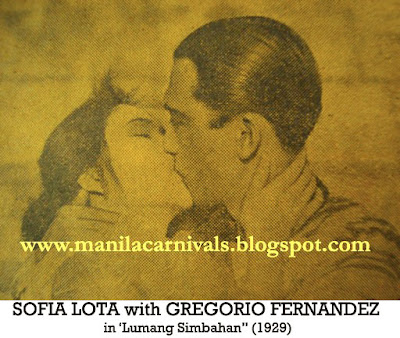 Sofia was a natural in front of the camera, and the next year, she found herself appearing with Vicente himself in the movie “The Soul Saver”, which featured a a very rare screen kiss. At the time of the making of the movie, Vicente had a fiancée—Rosario H. Panganiban, Miss Pampanga 1926, who had competed against Sofia in the national carnival. During the filming of the kissing scene—then sensational in its time—Rosario was there to witness the on-screen osculation—take after take. Right there and then, Rosario decided to marry Vicente in a fit of jealousy.

The vampish beauty created quite a stir with her screen performances. Leading magazines like Graphic and Free Press took note of the "Moro girl making good in the movies". Right after finishing "The Soul Saver", Sofia was paired again with the dashing Gregorio Fernandez in the classic hit, “Lumang Simbahan” written by Florentino Collantes and directed by Jose Nepomuceno for Malayan Films. She was the ill-fated Julita to Gregorio’s Rodolfo. Again, it featured a mouth-to-mouth kissing scene with his leading man, and by this time, Sofia seemed to be very much comfortable doing the smoldering scene. "Excellent work by every member of the cast distinguishes it as a drama of genuine merit. But it is Sofia Lotta who is the star", reported The Tribune and Herald on the acting of Miss Cotabato. The Times gushed, "The work of the youthful star, in fact, does much to establish the picture as a masterpiece of stirring, moving melodrama. Her part alone makes the picture worth seeing".

She did one more film, "Ang Mutya ng Pamilihan" in 1929, where Francisco Varona, a member of the Philippine Carnival Association, made a cameo role. Sofia Lota became one of the top stars of a generation of artists in the early 30s that included Naty Fernandez, Gregorio Fernandez, Maggie Galloway, Dimples Cooper, Eva Lyn, Carlos Padilla, Eduardo de Castro, Nena Linda, and Giorgina Hollis.
Posted by Alex D.R. Castro at 6:28 PM