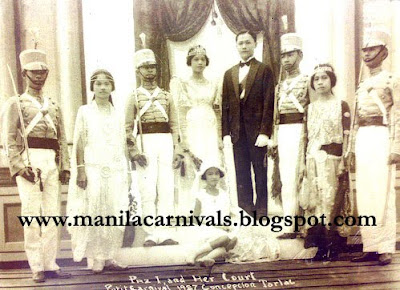 Concepcion, one of the largest municipalities of Tarlac province is also known as the birthplace of Sen. Benigno “Ninoy” Aquino Jr. The historic town celebrates its town fiesta (pyestang balen) every 25th of April, which surprisingly is the feast day of San Marco. It can be surmised that the April 25 date originated from the petit carnivals that were popular during during the first decade of American Rule in the Philippines.

Concepcion, like many other towns copied the happenings of the annual national Manila Carnival of the Philippines, integrating the crowning of a Miss Petit Carnival in its program if activities. In his write-up about his town fiesta, historian Dr. Lino L. Dizon notes: “Both adults and children eagerly awaited not only the beauty queens of the Karnabal – as the dominant Kapampangans of the municipality pronounced such an event – but also the piyalben quing patiu (sights in the town square).

The early 1900s would have been dominated by the musicus (brass bands) parading around the town and the arcos (arcs) built in the heart of the plaza festooned with banderitas, where zarzuelas and crissotans were held. Later years would have seen the karnabal become more mechanical, with the arrival of the arueda (ferris wheel, from the Spanish rueda), the merry-go-round and other rides, collectively called chubibu (literally, ‘pacifier’ in Spanish). And each taga-Concepcion, irrespective of social class, would be eagerly inviting fiesta-goers to their dining table or even their lowly dulang, sharing genuine hospitality and their taung fiesta, like the lechun, the bringhi, the achara, and the putu lansung.” 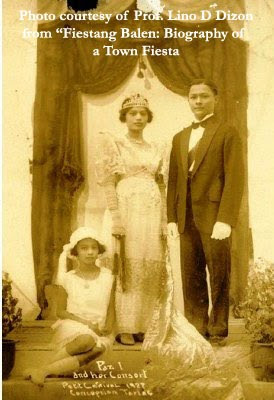 The 1927 Petit Carnival of Concepcion was attended with similar fanfare. That year, Queen Paz I was elected as the carnival royal. Nineteen year old Paz Feliciano (b/ 13 Nov. 1918/ d./ 18 Feb. 2008) was born to a prominent family of hacienderos who were one of the original settlers of Concepcion., together with the Aquinos, Pinedas, Yumuls, Castros, Bermudezes and Cortezes. Paz had a sister, Consolacion (later married to an Ibarra)

She later married Atty. Patricio Y. Pineda Sr., a prominent lawyer and one of the incorporators of the Rural Bank Association of the Philippines. Their children included Corazon, Cecilia, Patricio Jr., Bernadette, and Maria Paz.


One of the princesses of Queen Paz I was an equally well-known town beauty, 17 year old Aurora Aquino. She would go on to be the second wife of Assemblyman and Sen. Benigno Aquino Sr., (after Maria Urquico) who was, in fact, a third cousin. They were married on 6 December 1930, and their union resulted in the following children—Maria Aurora (Maur), Benigno Simeon, Jr. (Ninoy), Maria Gerarda (Ditas), Maria Guadalupe (Lupita), Agapito (Butz), Paul, and Maria Teresa (Tessie)

(THANK YOU to Prof. Lino Dizon for the use of the photo of Paz I and her consort, taken from his article: Fiestang Balen: Biography of a Town Fiesta.http://www.apwn.net/index.php/archives/more/fiestang_balen_biography_of_a_town_fiesta_by_lino_l_dizon/)
Posted by Alex D.R. Castro at 4:21 PM