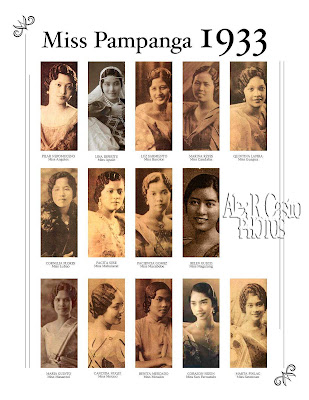 In 1933, Kapampangans held their grandest event ever, to celebrate the progressive stride made by Pampanga in the two previous decades. From 22 April to 6 May 1933, the Pampanga Carnival Fair and Exposition—“the greatest concourse of people on the island of Luzon”--was held at the Capitol grounds in San Fernando.

The much-awaited selection of Miss Pampanga 1933 provided the climax of the fair. Pampanga’s leading muses, most from socially prominent families. First, each town had to select its own “Miss Municipality” to compete in the provincial pageant. Socio-civic and youth groups like Mountainside, Circulo Escenico, Kayanikan ning Kuliat and Aficionados Baculud helped in drawing up a beauty list from which the loveliest was chosen. Not unlike contemporary pageants marked by sourgraping and backstage dramas, the Miss Pampanga search had its share of controversies.

First, the selection criteria was put in question. Following the Manila Carnival style of selection, Miss Pampanga was to be chosen based on newspaper ballots cast in her favor. A leading Kapampangan newspaper, “Ing Cabbling”, put out an editorial that cautioned using “social influence”, rather than physical beauty , as basis for judging. It even went as far as recommending an ideal mix of judges to make the selection truly impartial and objective, a panel to include a painter or sculptor, a poet, a high society lady, a professional and a respected elder from the province.

Then there was the case of a town muse who, in the voting, was boycotted by her own town mates because of her perceived snobbishness and haughty demeanor. In one tabulation, she gathered zero votes. Despite these minor issues, the contestants had a great time as they were feted and paraded about in motorcades. In the end, it was the slim and svelte Miss San Fernando, Corazon Hizon who romped off with the title.

MISS ANGELES, Maria Agustina Pilar Nepomuceno. (b. 13 October 1911-d. 5 June 1995) Daughter of Gonzalo Mariano Nepomuceno and Gertrudes Ayson y Cunanan. Not much is remembered about her reign or the circumstances of her victory. Later married noted doctor, Conrado Manankil y Tison. They have 4 children, one of whom—Marieta Manankil (now Mercado)—continued the tradition of beauty in her family by becoming Miss Angeles 1955.

MISS BACOLOR. Luz Sarmiento. (b. 23 July 1914-d. Aug. 1988) to Laureano Sarmiento and Ines Lugue. Studied at the local St. Mary’s Academy, then attended Assumption Academy in neighboring San Fernando for her higher education. Became Pampanga’s entry to the 1934 Manila Carnival. After the contest, settled down as wife to Jose Gregorio Panlilio y Santos-Joven, in April 1934. An only child, Jesus Nazareno a year later. The couple made their home in their beloved Bacolor, where Luz propagated a lifelong devotion to Nuestra Sñra. del Rosario.

MISS MAGALANG. Belen Gueco. Daughter of Lorenzo C. Gueco, a successful doctor, sugar planter, business man and PASUDECO stockholder and Elena Aquino. Her elder sister Paz was also a noted town beauty. Schooled at St. Paul’s Institute, Manila. She was an active and popular member of Rho Alpha and Nucleo Solteril. Her candidacy was supported by the Mountainside Club, headed by Jose Luciano, but pulled out of the provincial contest after some controversy. Nevertheless, she was feted house-to-house by her proud kabalens, who were rumored to have withdrawn their support for her. Later married Jose Tinsay.

MISS MASANTOL. Maria Guinto. Later married Artemio Manansala with whom she had 7 children, mostly U.S. based. Died 1969 of cancer.