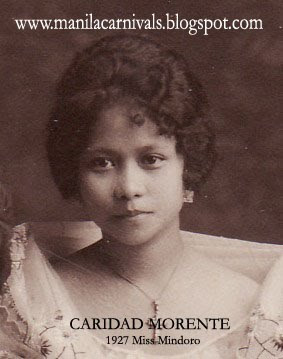 Caridad “Caring” Morente, Mindoro’s bet to the glittering 1927 Manila Carnival was born on 7 January 1906 and grew up in the rustic Pinamalayan town. After graduating valedictorian from grade school, she was sent off to Manila for her high school education at St. Scholastica. She became a boarder, together with her sisters, Consuelo and Guadalupe in faraway Manila, and as such, could only afford to come home to Mindoro only once a year, in a boat.

Under the watchful eye of the German Benedictine nuns, Caridad excelled in science and physics. She was in junior year when she was chosen to represent her island province in the national search for the Carnival Queen by Mindoro Gov. Ignacio, with the support of her father. The crown was won by Manila’s Luisa Marasigan.

Caridad, however, was more concerned about her future than wearing a rhinestone crown. After graduating from St. Scholastica in 1928, she enrolled at the University of the Philippines where she obtained her Bachelor of Science in Zoology, a pre-Medicine course and where she also became an instructor for 9 years.

Twice nominated to a Barbour scholarship to Michigan University, her old-fashioned father would not allow her to make the overseas trip. In 1933, she married lawyer-landlord Jesus Tereso Pineda and moved with him to his large farm in Concepcion, Tarlac where she readily picked up the Kapampangan language while raising six children, who all earned M.A. degrees.

Though poor health prevented her from becoming a doctor, Caridad encouraged others to develop their talents. She became the President of the Puericulture Center of Concepcion, Tarlac and remained a mentor to the Center for 13 years.

With the help of the late Congressman Jose Feliciano of the third district of Tarlac, she was able to put up a building for the center. To foster health and sanitation in their barrio, Caring held contests for the cleanest and most orderly house and yard, giving away such prizes as home furnishings and kitchenware.

She convinced her husband to get Kapampangan priests to give their tenants retreats and she herself taught them how to confess. She and her husband also helped build a chapel for the barrio. 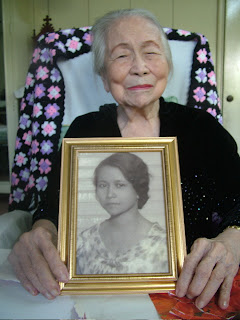 Tragically, a car accident claimed the life of her husband, Jesus Pineda, in 1972, a crash she survived. She then devoted herself to apostolic work as a tertiary sister of the Third Order of St. Dominic. She established a Tertiary Chapter in Tarlac, becoming a Prioress for two consecutive years. She taught catechism, Spanish language lessons, good manners and right conduct and cooking to member communities until she was 93 years old. She also regularly visited Mother Teresa’s hospital in Tondo and the Bahay na Walang Hagdan, helping care for the sick.

At age 98, she suffered a fall that required a hip operation from which she happily recovered: a smiling survivor if ever there was one. She shares a centennial birthday with St. Scholastica College and now, over 104 years old, she is not only the school’s oldest surviving alumnus but also an outstanding Scholasticisian