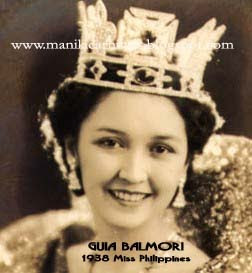 1938 MISS PHILIPPINES, Guia Gonzales Balmori, a petite UST beauty won the national title in the waning years of the Carnival. The Balmoris, of Sppanish-Kapampangan descent, were longtime Ermita residents. Guia was named after Ermita's patroness, Our Lady of Guidance.

Guia Gonzales Balmori was the 2nd known winner of the 12th National Beauty Contest of the Philippine Exposition (as the Manila Carnival was now known) with Kapampangan roots. She was born on 13 November 1920 to Joaquin Balmori of Bacolor, a well-known labor leader and Rosario Gonzales, originally from Pangasinan. (It is interesting to note that the Pangasinense Gonzaleses produced 2 beauty queens—Nieves Gonzales, Queen of the Pangasinan Carnival in 1919 whose grand daughter, Maria Margarita Moran became Miss Universe 1973). The Balmoris were of Spanish stock, and this showed clearly in Guia’s fair and finely chiselled mestiza features. 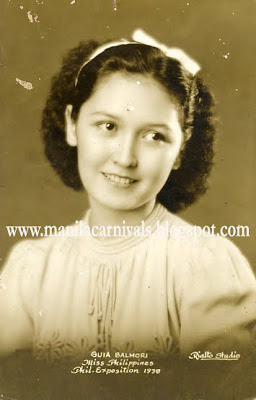 THE YOUNG GUIA. A popular Thomasian student at the time of the contest, Guia's fair mestiza beauty is evident in this official portrait done for the Carnival.

The Balmori family settled in Ermita and Guia was named after the district’s titular patroness, Nuestra Sñra. De Guia. During the annual fiesta, Guia was a regular participant in the "Bota de Flores", where young ladies and their escorts in sailor's costumes re-enact the 1918 return of the revered image to her Ermita shrine in a traditional procession.


Guia was a secretarial student at the University of Santo Tomas when the contest beckoned. Her exquisite beauty was evident at a young age, and the Philippine Free Press immediately included her in their magazine-run search for Miss Philippines, eventually emerging as Miss Mindanao. But at the 1938 edition of the Carnival, Guia did even better. Her candidacy however, stirred quite a ruckus, from her father who saw the pageant as a frivolous exercise, to the religious nuns in school who frowned on such beauty shows. Nevertheless, she surprised everyone with her victory. 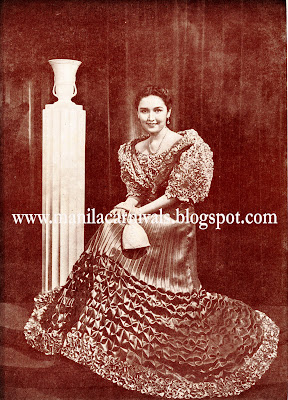 AS MISS MINDANAO OF THE PHILIPPINE FREE PRESS. Guia Balmori placed 4th in the magazine-conducted search for the 1938 Miss Philippines, won by a Boholana. 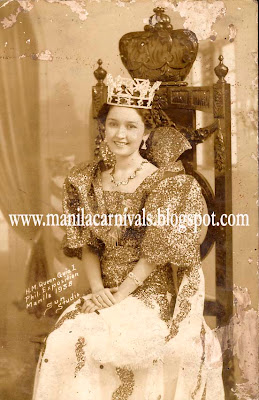 GUIA'S GRACE. The young queen in her coronation attire designed and executed by the couturier of the day, Ramon Valera, now a National Artist.

At her coronation, she wore a Ramon Valera gold gown and was escorted by a dashing Kapampangan collegian, Ernesto “Gatas” Santos, son of Don Teodoro and Dña Africa Santos of San Fernando and Mabalacat. Her prize money of P1,000 was discreetly tucked in her bouquet. 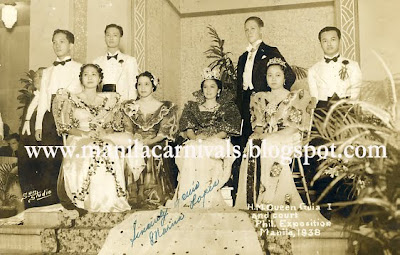 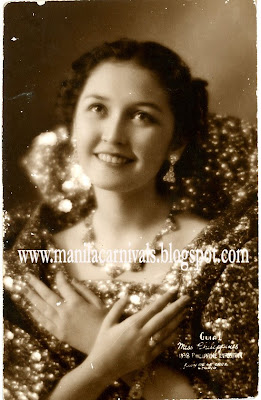 GOLDEN GIRL. Guia Balmori basks in her triumph as queen of the Philippines, dressed in a gold lame terno. for this formal photo.

She settled in Parañaque and operated a beauty parlor in Makati with her daughter for many years. Living a long, meaningful life, she passed away on 12 December 2006. A scant 5 days after, her husband, Jose Avelino Jr. joined her beloved in eternal life; as one granddaughter mused—even in death, they could not stand to be apart.