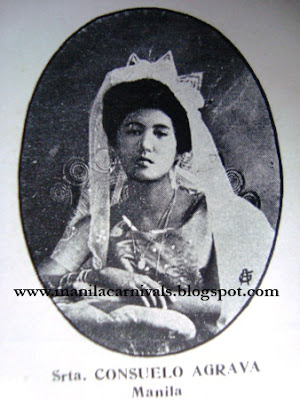 CONSUELO DE CARNAVAL. Local beauty, Consuelo Agrava of Manila, captivated the carnival crowd with her morena beauty and soulful eyes, reigning as Sultana del Pasig in the 1st edition of the national fair.

The first-ever Manila Carnival of 1908 probably holds the record as the carnival edition with the most number of royal beauties. Not only did the fair had two queens (Pura Villanueva as 'Queen of the Orient' and Marjorie Colton as 'Queen of the Occident'), but each reina had a retinue of at least 12 damas with their own 12 consortes, plus 4 young courtiers or page boys.

Another special title was given to a local beauty to represent the royal realm of Pasig, an important district of Manila on whose land the great and mighty river that dictated the commerce of the land--Rio de Pasig--flowed.

The first Sultana del Pasig, Consuelo Agrava, from the Bureau of Education, was handpicked by city officials for her very apt beauty. She As “El Renacimiento” reported, Miss Agrava, was “truly of the Sultana type, dark, with ojos de sulamita” (eyes of a peaceful woman).

A spectacular float was made by her city exclusively for her, an Oriental pagoda featuring native nymphs positioned up front, in the act of rowing. Over the boat, large “tutubis” or dragonflies hovered around her, coming to life as the carroza was driven at the Hippodrome. At the poopdeck—the topmost part of the float—Consuelo did not sit, but reclined on a lounge—the dramatic pose of the sultana elicited much applause from an awestruck crowd.

After the Carnival hoopla, Consuelo returned to her work as an educator, becoming an active member of the Parent-Teacher's Association (PTA) of Manila where she was, at one time, named as Chairman of the Committee for Entertainment. She married Jose Alvarez Agoncillo with whom she had three offsprings: Antonia, Marina and Francsico.