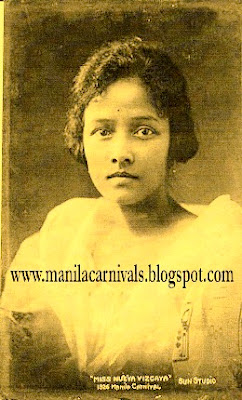 
The first and only Miss Nueva Vizcaya to compete in the Manila Carnival's first Miss Philippines quest of 1926 was Martha Adduan Maddela, daughter of Vicente Bacani Maddela and Mauricia Adduan. The Maddela children also included Juan, Carmen, and Felix Ricardo.

In her later years, Martha married Juan Flores, with whom she had the following children, namely Philip, Carlos, Domingo, Teddy, Miling and Lourdes.

The Maddelas are an old family from Nueva Vizcaya who settled in the capital municipality of Bayombong. Tomas Maddela was its town mayor in 1945. Today, a town named after the Maddelas can be found in the province of Quirino, which used to be a forest region of Nueva Vizcaya.
Posted by Alex D.R. Castro at 3:17 AM