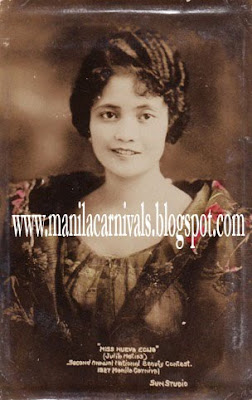 The first time Nueva Ecija fielded a representative to the Manila Carnival quest for Miss Philippines was in 1926, when the first official Miss Nueva Ecija was crowned. This sparked interest in the national carnival promoting the provincial government to hold its own petit carnivals.

In 1927, Nueva Ecija again named its second queen to compete in the 2nd National Beauty Contest. She was none other than 21 year old Juliana "Julita" Matias, born on 11 December 1904. After her carnival campaign (the title went to Tayabasin Luisa Marasigan), "Julie" married Manuel Serrano Maronilla Sr., with whom she had 7 children: Manuel Jr., Jose, Irene, Norberto, Julian, Ramon and Mary.
Posted by Alex D.R. Castro at 10:41 PM

Thank you for the correction. Would you have a more detailed biographical sketch of her that you can share? I would appreciate that very much.