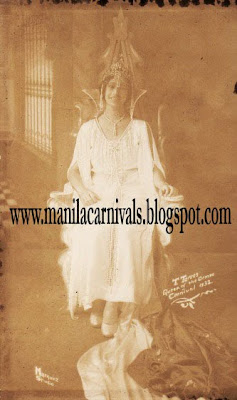 ORMOCANON QUEEN. The royal queen of the 1932 Ormoc Carnival, identified only as T. Torres. Dated 1932.

Ormoc, now a city of Leyte, got its name from 'ogmok', an old Visayan term for lowland or depressed plain. Its early economy is agriculture-based, with a well-developed sugarcane, rice and pineapple industry. Ormocanons also subsisted on aquaculture or fishing.

The people of Ormoc are predominantly Catholic with a visible Muslim minority. Like other Philippine towns and places, Ormoc celebrates its annual fiesta in honor of the patron saints Saint Peter and Saint Paul on June 28 and 29.

In 1932, the one and only known Ormoc Carnival was held, possibly to coincide with their fiesta celebration. Chosen as the royal queen was the lovely Trinidad Garces Torres.The future carnival beauty was born in Ormoc on 5 July 1905, to Nicolas Torres and Carlota Garces. The prominent Torres family were of Spanish-Filipino-Chinese descent and this mix of races showed best in Trinidad's refined and delicate beauty (Lucy Torres, congresswoman, showbiz personality and wife of actor Richard Gomez comes from this clan).

“Trining”, as she was fondly called by close friends and family members, studied at a local school, St. Peter’s Academy. For her college education, she was sent off to Cebu where she enrolled at the Colegio de la Inmaculada Concepcion.

Tall, gentle and always with a ready smile, Trining was the perfect choice to reign as the Queen of the 1932 Ormoc Carnival. She not only captivated the local crowd, but also a military man--Col. Segundo de Guzman Vergara, AFP PC, whom she married right after the Carnival on 21 May 1932. 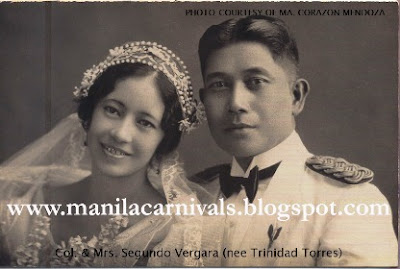 As a young wife, Trining became adept in the domestic arts: sewing, baking and cake decorating. Gifted with an artistic flair, she took up painting as a hobby. The Ormoc ancestral home which was just across the Ormoc tennis court, gave her the chance to learn tennis and she enjoyed it as her sport. The Vergaras had seven children: Fe, Esperanza (twins), Caridad, Rodolfo, Teresita. Nicolas and Ma. Corazon.

At the height of the second World War, Col. Vergara, who was engaged in guerrilla activities, was caught by the Japanese in Baguio City. Trining’s strong devotion to the Sacred Heart and her valiant spirit saw the family through in their most difficult times.

After her husband’s retirement from military service, the family settled in Cebu City where Trining took an active part in the Sto Rosario Parish as a Catholic Womens’ League officer. At the age of 52, she was called back home by the Lord on 19 July 1957.
She lived long enough to writer her memoirs which were published and given away to relatives and friends who came to celebrate her 100th birthday.

Today, local residents are proud of what Ormoc has become--an independent component city, not subject to regulations from the Leyte provincial government. In fact, Ormoc today is the acknowledged economic, educational, cultural, commercial and transportation hub of western Leyte, notwithstanding the killer typhoon that flooded the city and took more than 6,000 lives in November 1991.

(Many thanks to Ma. Corazon Vergara Mendoza, daughter of Mrs. Trinidad Torres-Vergara for the biographical sketch of her mother. Additional info provided by Mr. Louie Nacorda, after contacting his cousin, Jullie Martinez Torres, Lucy Torres' mother).
Posted by Alex D.R. Castro at 5:14 PM

Thanks, Joanne, I was actually told about this Agacaoili connection by a friend from Cebu. My, beautiful genes run in the family. Salamat for dropping by.