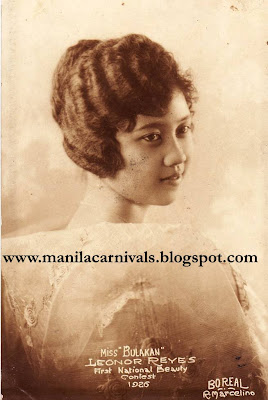 QUEEN AT SIXTEEN. The first official Miss Bulacan title was held by a teenager, Leonor T. Reyes, who was appointed in 1926 to represent the province in the 1st National Beauty Contest.

Leonor Tantoco Reyes, was just a a young lady of 16 when she was named as the first Miss Bulacan of 1926. Born in 1919, Leonor comes from a progressive and nationalistic family from Malolos; in fact, several of her blood relations are members of the esteemed “Women of Malolos”, who petitioned Gov. Gen. Valeriano Weyler in 1888 to let them open a night school and who were praised by Rizal through his famous letter addressed to them. In this group were Maria and Teresa Tantoco, aunts of Leonor.

After the Miss Philippines contest in Manila (won by Miss Batangas, Anita Noble), Leonor resumed her studies and finished her Education degree in 1933 from the University of the Philippines. She earned her Master in Education from the same school in 1954. Leonor was a teacher all her life and remained unmarried.

When she died at the ripe old age of 96 on 27 February 2006, she left behind a brother, Leopoldo and three sisters-in-law. She rests at the Manila Memorial Park in Parañaque. Her heritage house still stands preserved in Malolos.
Posted by Alex D.R. Castro at 4:31 PM

Hello alex! Great blog you got here. I remember reading about a prominent dressmaker in pre-war manila who made coronation gowns for several carnival queens. However, I just couldn't recall her exact name. I hope you could help me by providing some names you can think of. I keep on thinking of Matilde Olmos pero I'm sure it was another dressmaker.. THANKS

Thank you. The couturier's name is Pacita Longos. She did a lot of gowns for the winners, and the coronation gown of Maria Kalaw is just one of them.

Matilde Olmos was a prominent dressmaker in the Philippines, she also made gowns for the Carnival Queens and other special occasions.

Thank you for the added information. Her name is new to me, I better bone up on my research.