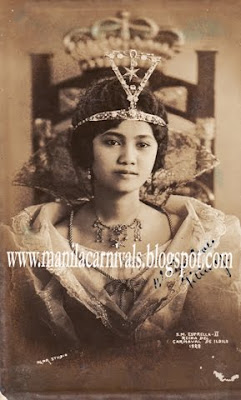 STAR OF THE CARNAVAL DE ILOILO. Her Majesty, Estrella II, wearing her crown of beauty and patriotism. Dated 1928.

To the province of Iloilo goes the distinction of producing the very first Queen of the Orient—Pura Villanueva—the accomplished Ilongga-Spanish mestiza who ruled and captivated the crowds of the 1908 Manila Carnival. In the succeeding editions of the Carnival, Iloilo belles regularly made their appearance on the Carnival stage in Luneta, to compete against other provincial muses for the title of ‘Queen of the Manila Carnival” and later, “Miss Philippines”.

Some Ilongga beauties who went to the national Miss Philippines pageant included Amparo Unson (the first Miss Iloilo) who vied for the title in 1926 and Julieta Lopez (Miss Iloilo 1927). Both, however, did not advance to the finals.

In 1928, the provincial government held its own Carnival, but the details of that event are lost to us. A queen, Estrella Villanueva II , nicknamed “Tiliang”, ruled the festivities of the ‘Carnaval de Iloilo’. We do not know if she was to have been the official Iloilo representative to the national Carnival, but in 1928, the event was scrapped due to financial, organizational and timing problems.

It would be another 22 years after Pura, for another Ilongga to bring home the crown for the province again. In 1930, the lovely Consuelo ‘Monina’ Acuña was crowned Miss Philippines.
Posted by Alex D.R. Castro at 4:50 PM

She is Estrella Villanueva. Daughter of Rodrigo Rodriguez Villanueva and Ruperta Villanueva from Jaro. her uncle known as Esteban Villanueva gifted her the gown she wore during the coronation. She didn’t go to the national competitions.

Thanks for this new piece of information.