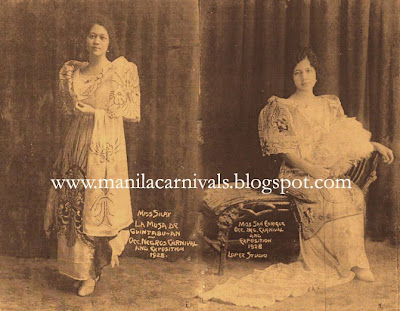 MISS SILAY & MISS SAN ENRIQUE OF 1938 Beauties of the 1938 Negros Occidental Carnival & Exposition.
Negros had its own provincial version of the Carnival in 1928 with the launch of the Occ. Negros Carnival and Exposition. The "Sugar Queen of the Philippines" could very well afford to have its own fair, to showcase their affluence and prosperity brought about by its profitable sugar industry. As early as the Spanish times, Negros enjoyed a level of importance due to the huge economic investments infused on its sugar industry and towns like Victorias and Silay boomed, becoming more cosmopolitan and Hispanized as the years went by. This went on until the American Occupation, where its sugar produce was lapped up avidly by the U.S. market.

As such, the Negrenses' joie de vivre found outlets in festivals inspired by the Manila Carnival. The first Miss Negros Occidental had participated in the 1st National Beauty Contest of 1926, and from that moment on, the Negrenses have never ceased creating their own celebrations. In the 1928 provincial carnival, town muses graced the festivities and two of them are featured here: Miss Silay (La Musa of Guintabu-an) and Miss San Enrique, both unidentified in the photographs.

Today, the festival tradition continues in Negros, with the famous MassKara Festival of Bacolod, the Pintaflores Festival of San Carlos City and the Pasalamat Festival of La Carlota City.
Posted by Alex D.R. Castro at 12:10 AM