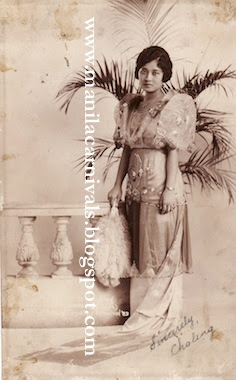 CHOLENG'S CHARM. Consuelo Lim poses for her official photo as candidate of the 1929 Tayabas Carnival.

Inspired by the victory of their local girl, Luisa Fernandez at the 1927 Manila Carnival (she represented Manila though),  Tayabas provincial officials put up their own petit carnival in 1929 to show the progressive strides the large province has achieved since the start of the American colonization. It was also an opportunity to bring out the province's fairest for all the world to see.

The beautiful representative from the town of Calauag, 19 year old Consuelo "Choleng" Eclavea Lim, emerged victorious as the provincial queen of the Tayabas Carnival. She was a student of Centro Escolar de Senoritas when she was elected. She later became the 2nd wife of the first Quezon City mayor, Tomas Morato and former mayor of Calauag, Tayabas (now Quezon).  Manuel "Manoling" Morato is her son.