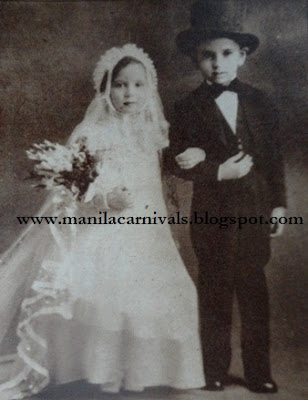 Siblings Queenie Melvin Arcache (1935-1999) and Maurice Arcache romped off with one of the top prizes at the Children's Fancy Dress competition by coming in as little Bride and Groom. A sister, Olivia, also competed as a French princess, complete with a powdered hair wig.

The Children's Fancy Dress Ball was one of the highlights of the yearly Manila Carnival, an even that gave mothers the chance to show off their sewing skills and creative flair in fashioning the most fantastic costumes for their children.

They are the children of Joseph and Mary Arcache of Pasay and later, of Sta. Ana, Manila. (Another daughter of theirs, Pearlie Arcache, became a top ramp model of the country back in the 60s).

Maurice Arcache grew up to be the country's premier society columnist (currently with Philippine Daily Inquirer) and TV host.
Posted by Alex D.R. Castro at 6:20 PM