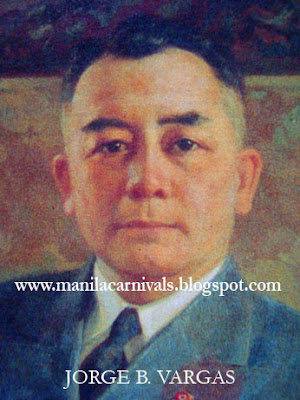 BY JORGE, THERE'S A CARNIVAL! Jorge b. Vargas was a moving force of the Manila Carnivals, starting from the 1920s down o the Commonwealth years, serving in different capacities as Director General and as permanent member of the Pgilippine Carnival Association. Portarit by Fernando Amorsolo.

Jorge Bartolome Vargas (b. 24 August 1890) was a long-serving member of the Philippine Carnival committee, an association which began in 1909, when he won a carnival-sponsored essay contest while a student at the University of the Philippines. The brilliant son of Angel Tiongco Vargas and Filomena Trinidad Celis from Negros Occidental, Jorge graduted with a Bachelor of Arts degree in 1911, and Bachelor of Laws in 1914. He actually qualified as a government scholar in 1914, but financial problems quashed his dream to be a pensionado.

The young lawyer was appointed as clerk in the Philippine Commission after passing the bar, and was promoted to the position of Chief Clerk of the Department of the Interior in 1917. The next year, he became Speaker Sergio Osmeña’s legislative secretary and in 1919 was handpicked by President Manuel L. Quezon to be his Executive Secretary. 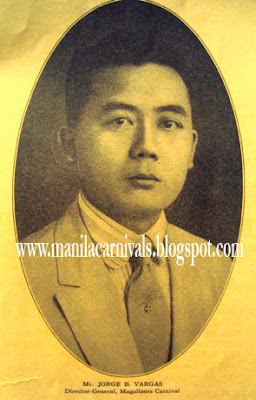 In 1921, Vargas became the Director-General of the Manila Carnival, also dubbed as the Magallanes Carnival. It turned out to be a resounding success, and from that moment on, Vargas became a permanent fixture in the Carnival circuit, assuming different executive posts, from the 20s through the Commonwealth years.

When World War II reached the Philippines, Vargas assumed mayorship of the open city of Manila, which was occupied by the Imperial Japanese Army on 2 January 1942, declaring it an ‘open city’. Under a collaborationist Republic, he was the caretaker of the Philippine capital and served as the Philippine ambassador plenipotentiary to Japan.

After the War, Vargas was named Chairman of the National Planning Commission from 1946–1954 and was a member of the Board of Regents of the University of the Philippines from 1961-1965. In 1960, the Republic of the Philippines awarded him the Legion of Honor with the rank of Commander. 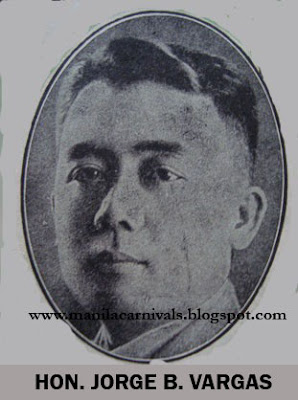