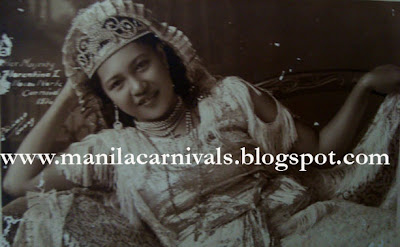 ON HER MAJESTY'S SECRET SERVICE. Queen Florentina I. Ilocos Norte Carnival Queen of 1936.
The province of Ilocos Norte was quick to take a cue from neighbor Ilocos Sur in holding its own petit carnivals. Ilocos Sur seemed to have taken the Carnival spirit more to heart, holding provincial fairs with more frequency and at every given opportunity. But it is to be remembered that Ilocos Norte gave the country its second Manila Carnival Queen, in the person of Julia Guerrero Agcaoili of Piddig, who reigned in 1909. Her sister, Pilar, also was the Queen-elect of the 1929 Ilocos Norte petit fair.

Ilocos Norte fielded two beauties in the 1926 and 1927 editions of the national Manila Carnival. In the dying years of the Carnival, the only documented provincial fair was held in 1936, in which this beauty, "Her Majesty, Queen Florentina I", reigned over the festivities. Nothing more is known of this Ilocana beauty. The last Ilocos Norte Carnival was held in the postwar year of 1946.
Posted by Alex D.R. Castro at 1:59 AM