169. THE PETIT CARNIVALS OF ZAMBOANGA, part 1

Ever since local mestiza girl Carmen Fargas put Zamboanga province in the national beauty map by winning “Miss Pearl of the Orient Seas” at the first ever Miss Philippines quest of 1926, the city was never the same again. Zamboangueños became determined to duplicate the festive mood of Manila by staging their own petit carnivals. 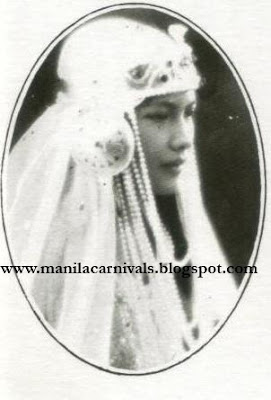 Zamboangueños were already celebrating Rizal Day, Garden Day and the city fiestas with spectacular results since the 1920s, and the petit carnivals were another welcome additions to their fondness for social revelry. Two petit carnivals—one in 1930 and the last in 1934-- stood out for the lavishness of the staging and the competitiveness of the candidates in the beauty search.

Antonio C. Orendain, author of “Zamboanga Hermosa”, had vivid recollections about these most-awaited events of the city:

“The Carnivals were exciting. The Red Rovers sponsored most of them… The (beauty) contest was the Carnival fund raiser in those days and sympathizers sold ballots for their candidates. Family prestige and personal popularity counted for victory more than beauty—physical, intellectual, moral. When the candidates were on an even keel in their attributes, the contest was feverishly exciting. 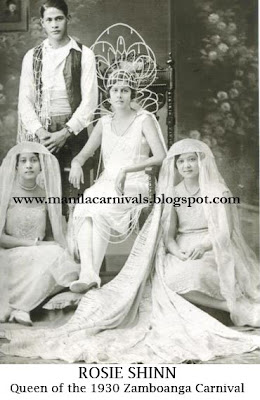 IN THE DAYS OF MILK & HONEY, Zamboanga residents celebrated their fiestas lavishly and indulged even more luxuriously in fairs and carnivals with beauty queen to boot. In the petit carnival of 1930, the beauteous Rosie Shinn reigned as the queen with the debonair Pab Sebastian as her consort. Completing her court was the lovely Luisa Fernandez and Josefina Fermin.
In one such contest did Conchita Albrecht of Maluso lose to Rosie Shinn of Zamboanga City. Both mestizas were ravishing beauties and the contest was talked about for years later. The coronation pageants were fanciful, ranging from Egyptian, Arabic or Moorish spectacles to metaphoric fantasies. From the time Carmen Fargas won the title of ‘Pearl of the Southern Seas’ in a national beauty contest in Manila, the metaphor was popularly adopted." 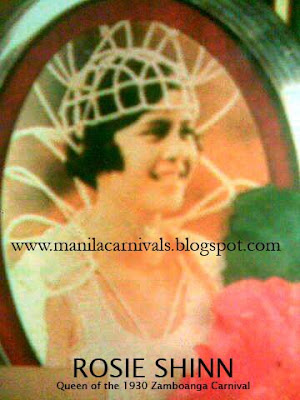 Carnival organizers engaged the services of the best decorators in the province. Ramon Ramirez, for instance, a town artist who embroidered garments for santos, decorated chapels for fiestas and taught folk dances for veladas, was commissioned to direct most of the pageantry of the petit carnivals. In Tetuan, Badong Azacarraga, had the final say in the artistic directions for the district festivities, while a certain Pinky did all the work in the Visayan center of San Jose.

In that romantic era, the winning queens were exalted and extolled, often depicted as pearls and, as such, had thrones designed like cockleshells. Symbolic representations were the fad and there was even a year when dancers danced out of a giant pot to pay tribute to the Carnival sovereign.
Posted by Alex D.R. Castro at 1:47 AM