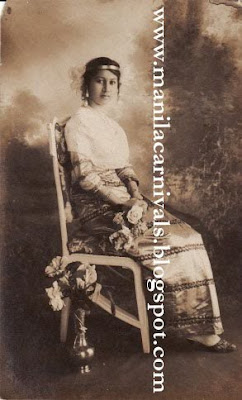 PRINSESA ZENZA DE MINDANAW, Rosario Reyes y Fernandez of Camiguin reigned in the Mindanano Court of the Queen of Mindanao, who happned to be her elder sister, Remedios. The Reyes sisters were known all over the island as enchanting beauties. Ca. 1912.

The 1912 El Dia Filipino del Carnaval was unique in several aspects especially with the selection of Carnival beauties that saw the crowning of the “Matrona de Filipinas”, Paz Marquez. She was attended by regional queens representing Luzon, Visayas and Mindanao, who, in turn, had also had their own array of ‘damas y consortes’, making for a larger royal contingent that rivalled that of the first Carnival.

The Mindanao Queen who bore the fancy title “La Sultana Zoraida de Mindanaw” was Remedios F. Reyes of Camiguin Island whose sisters were just as beautiful. When she won, she called on her sisters to be part of her court. A younger sibling, Rosario Reyes, thus became one of her princesses, assuming the title, "Prinsesa Zenza de Mindanaw".

Born in Mambajao in 1893, Rosario was the daughter of Don Rafael Reyes and Dña. Rafaela Haro Fernandez, rich hacenderos who were well-known in the whole of Camiguin. All their daughters were schooled in the finest institutions; just like elder sister Remedios, Charing was sent to the Colegio de Sta. Catalina in Manila, then moved to the Colegio de Sta. Isabel for 3 years. To further expand her horizons, she and her sisters moved to Hong Kong and became an intern at the Convento Italiano for another 3 years, to pursue a course in Fine Arts.

She so excelled in painting, winning a medal for her work, “ Un Dia Invernal”, at the 1908 Exposicion de Bellas Artes held in Manila. Four years after, at the age of 19, she would grace the Queen of Mindanao court as one of its lovely muses. A write-up about her described her thus: Endearing is how we call Charing, and she is truly a woman of allure and attraction, all at the same time. (“Cariñosa la llaman CHARING y ella es verdaderamente una mujer seductora y attractive y al mismo tiempo”.)
Posted by Alex D.R. Castro at 4:36 PM