COL. GEORGE T. LANGHORNE as Monsieur Beaucaire. The very concept of a Carnival in Manila was the brainchild of Col. George T. Langhorne, who served in the Spanish-American War and was later aide-de-camp of Major Leonard Wood. At the costume balls of the 1908 Carnival, he came as a character from Booth Tarkington’s 1900 novel, Monsieur Beaucaire, an English duke in disguise. Langhorne later saw action in the chaotic revolution of Mexico and served as commander of Fort Bliss in El Paso, Texas in 1917.He married Mary K. Waller in England in 1928.

MAJ. GEN. LEONARD WOOD as Dirk Turpin. (b. 9 Oct. 1860-d.7 Aug. 1927). New Hamsphire born Wood was trained as a physician. Came to the Philippines as commander of the Philippine Division and later, commander of the Dept. of the East. Chief of Staff of the U.S. Army, later Governor General of the Philippines (1921-1927). At the Carnival, Wood came as the legendary English rogue and highwayman, Dick Turpin. He was married to Louise Adriana Wood with whom he had 3 children: Leonard Jr., Louise Barbara, Osborne Cutler. 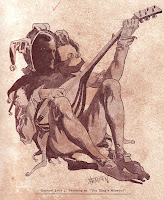 GEN. JOHN J. PERSHING as The Minstrel. (b. 13 Sept. 18609-d.15 Jul. 1948). Ordered to Manila in Mar. 1899 for the Philippine-American War. After going back to the U.S., he was re-assigned to the Philippines from 1909-1912 as Commander of Fort McKinley. Promoted to General of the Armies of the United States, the highest rank possible for any member of the U.S. armed forces, a title especially created for him.

COL. JOSEPH N. WOLFSON as The Buccaneer. After his military career, he started a lucrative law practice in the Philippines.

"HUMP" SULLIVAN, as The Court Jester