In one of the earliest petit fairs of Iloilo, the lovely Aida “Aiding” Kilayko reigned as the 1925 queen. Her parents were Eugenio Copa Kilayko and Celsa Lizares, both from landed families of Talisay, Negros Occidental, who owned large sugar haciendas and prosperous farm holdings. Aida was educated at the Assumption College in Iloilo, and excelled in piano. As a young member of the “buena sociedad Ilongga”, Aida was also known for being a cultured and refined young woman. 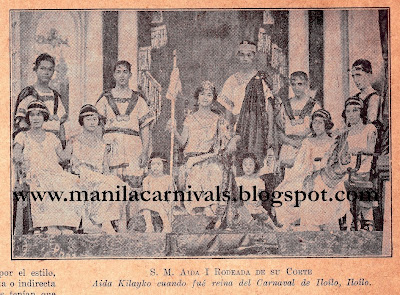 After her coronation as Iloilo’s carnival queen, she was back in Manila to continue her Pharmacy course at the Centro Escolar de Señoritas. By December 1925, she was in the front page again as one of the winners of Philipine Free Press’ search for the 4 most representative types of “Bellezas Filipinas”. Over two thousand pictures were received as entries of the popular Manila paper; these were whittled down to 72, then 24 finalists. A judging panel comprising of artists Fabian de la Rosa, Guillermo Tolentino, Fernando Amorsolo and Jorge Pineda chose the winners, headed by Manila Carnival contestants Rosario Panganiban, Salud Austria, Margarita Lacson and Aida Kilayko, who placed third. She won a gold panuelo pin for her win. 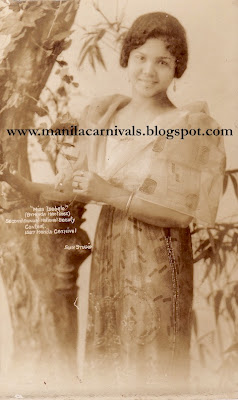 ISABELA'S IDOL. The first Miss Isabela, Arminda Martinez in her official portarit as a candidadte to the 1926 Miss Philippines quest.

The second largest province in the Philippines (after Palawan), Isabela was created in 1856  carved out from the rich, expansive region of Cagayan Valley. The province was named after Queen Isabela II of Spain.

After the end of the Philippine Revolution which saw the capture of Pres. Aguinaldo in Palanan, Isabela, the province was reorganized under the American regime through Act No. 210, passed August 24, 1901. The province was a noted corn and rice basket in the region and found a cause to drumbeat this reputation through its participation in the annual Manila Carnival.

Out also to prove that Isabela was not just a land of plenty but also of beauty, the provincial government sent its first-ever beauty delegate to compete in the 1st National Beauty Contest of the 1926 Manila Carnival. The pert and pretty Arminda Martinez was appointed for the job, which she did with aplomb at the national event. The title, however, went to Miss Batangas, Anita Noble.
Posted by Alex D.R. Castro at 5:18 PM 1 comment: 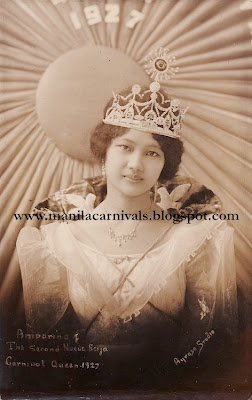 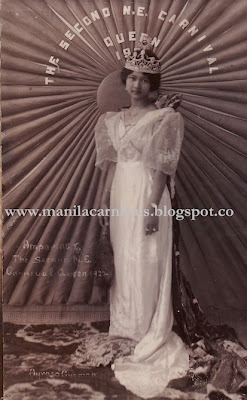 Gripped with Carnival fever, Nueva Ecija soon started holding its own petit carnivals beginning in 1926. In 1927, the 2nd Nueva Ecija Carnival was staged, capped with the coronation of Queen Amparing I, as the festival royalty.
Posted by Alex D.R. Castro at 5:03 PM 1 comment: 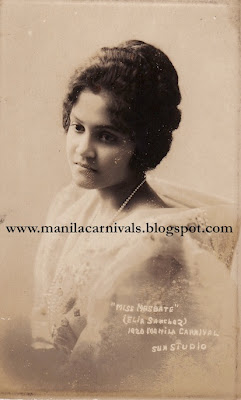 MAS BELLA! MASBATE! Elia Sanchez, the first and only known Miss Masbate to represent her island province of Masbate, at the 1926 Manila Carnival search for Miss Philippines.

The island of Masbate was just 4 years old when the local government joined the Manila Carnival as a form of support to the national festivities as well as to breastbeat the progress it has attained as an autonomous Philippine province.

Previously, Masbate was a part of Albay; it was declared a separate province  in 1864 with Guiom as its capital. Pres. Emilio Aguinaldo however, moved the capital to Masbate town, just before the declaration of the Philippine independence in 1898. With the arrival of the Americans, Masbate was again annexed to Sorsogon in 1908. It was finally declared an independent province with the approval of a bill on 1 February 1922.

In the revamped Manila Carnival 1926, Masbate was proudly represented by the dark-eyed mestiza beauty, Elia Sanchez, who blazed the trail by becoming the first and only known Masbateña to vie for the the Miss Philippines title.


Sanchez was educated at the Colegio de San Juan de Letran and married Genaro D. Briz, (lawyer-governor of Bicol-Masbate, 1932-1934, later Justice of the Peace of Masbate, Masbate, 1946)  in her later life. Papa Naroy and Mama Eyang had four children: Jose  (a doctor who moved to the U.S.), Rafael (who remained in Masbate), Soledad, and Natividad Briz-de Matera. The couple raised their children in Masbate where they had a large and thriving coconut plantation. Mama Eyang was just in her 30s when she died unexpectedly of pneumonia in her 30s which she caught due to exposure.
Posted by Alex D.R. Castro at 4:46 PM No comments: