HONOR FOR AUNARIO. Lourdes Aunario, 1930 Miss Philippines Candidate, was sponsored by the newspaper El Debate. She made it as one of the semifinalists.

In the controversial finals leading to the 1930 search for Miss Philippines that saw the withdrawal of frontrunner Violeta Lopez who refused to wear a swimsuit, one campus beauty found herself enmeshed in the fray. Lourdes Aunario was the candidate of the newspaper El Debate to the contest, which gave her all-out support.

The Spanish-Filipina mestiza was the daughter of Gregorio Aunario, whose father, Hugo Aunario came to the Philippines as a member of the Spanish Army. Hugo married a Filipina who bore two sons, Pedro and Lourdes’ father, Gregorio. She also had a sister, Carmen who went on to marry Sen. Saturnino Mendinueto.

The Aunarios were well known in Philippine society; uncle Pedro Aunario, for instance was the editor of the leading paper of that time, La Vanguardia and was a proficient writer in Spanish. Later, he entered politics and became a representative of Mountain Province, until he resigned from the legislature in 1923.

Lourdes made it to the semifinals, no mean feat, considering the presence of formidable beauties that included Estrella Alvarez, Nieves Benito, Rosario Ruiz Zorilla, Luz Villaluna, Corazon Campos, Violeta Lopez (withdrew) and  the eventual winner, Consuelo Acuña of Iloilo. It was said that one of her suitors was painter Fernando Amorsolo, the future national artist. After the contest, she got married and bore a daughter, Natividad, who married the son of Italian duke, Lombardi.

(Many thanks to Ms. Cecilia Lumbre, niece of Lourdes Aunario for the above information)
Posted by Alex D.R. Castro at 4:48 PM No comments:

The province of Cavite was another staunch supporter of the Manila Carnival undertakings, contributing its own commercial, agricultural and industrial exhibits for the fair. It also held its own Carnival versions--and at least one petit carnival, held in Imus, was organized in the mid 20s. In the 2nd National Beauty Contest of the national fair, Cavite sent the winsome 16 year old Leonor Bustamante as its official delegate, the first known Miss Cavite. Miss Philippines for that year went to Luisa Marasigan, who came in as Miss Manila.
Posted by Alex D.R. Castro at 5:57 PM 7 comments:

BEDIMPLED BEATRICE. The first official representative of the Pines City to the Manila Carnival beauty contest was Beatrice Sanup, Miss Baguio 1927 who fascinated the crowds at the fair not only with her dusky beauty but also with her traditional wardrobe.

Like Ilocos and Cebu, the province of Benguet has a rich carnival tradition that began in 1915 with the election of Ibaloy schoolgirl Eveline Chainus Guirey as its first queen. Its premier city, Baguio, held its first ever carnival in 1923, with Martina Salming reigning as queen. The beautiful mestizo Carmen Reese also was a royal-elect and other famous beauties who made national headlines included Corazon Custodio, Adela Romero and Rosita Moldero, originally from Lubuagan, Kalinga, who made it as Miss Free Press Luzon of 1929.

At the second National Beauty Contest, the Pines City was ably represented by local lass Beatrice Sanup, who, together with Juliet Linney (Miss Mountain Province) made waves at the fair with their exotic looks and fascinating local costumes. The bedimpled Beatrice took pride in wearing a traditional Igorot costume consisting of a ‘kambal’ (woven blouse top), “divit” (woven skirt) and "panjet" (headband), recorded for posterity in her official studio pictures.
Posted by Alex D.R. Castro at 4:27 PM No comments:

CONSOLACION PRIZE. The first and only known Miss Abra, Consolacion Purugganan, went to Manil to compete in the 2nd National Beauty Contest of the Manila Carnival, a beauty competition won by Miss Manila, Luisa Marasigan.

The first time that the province of Abra sent its beauty representative to the Manila Carnival search for Miss Philippines was in 1927. The honor went to the lovely Consolacion Purugganan of Bangued, who came from the large Purugganan clan that settled all over the Cordillera and the Ilocos region. The Purugganans count many prominent politicians in the family who figured in shaping the political history of the Ilocandia--like Don Severino Purugganan and Bangued municipal mayor, Ramon Purugganan. 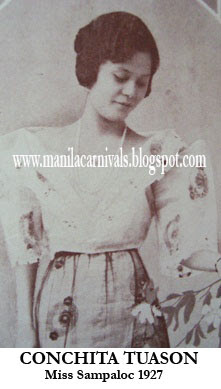 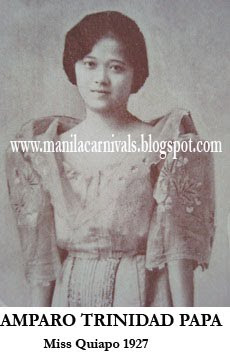 The two beauties on this page are the official representatives of Sampaloc and Quiapo, Conchita Tuason and Amparo Papa, respectively. Three finalists were picked from the line-up--Miss Binondo (Pacita Legarda), Miss San Lazaro (Salud Austria) and Miss Intramuros (Luisa Marasigan). Emerging as the overall winner was Luisa Marasigan, who swept competition away by winning two titles--Sultana de Pasig and the top title of Miss Manila. She went on even further in the national competition by winning the plum Miss Philippines 1927 crown, succeeding Anita Noble of Batangas.
Posted by Alex D.R. Castro at 5:23 PM No comments: