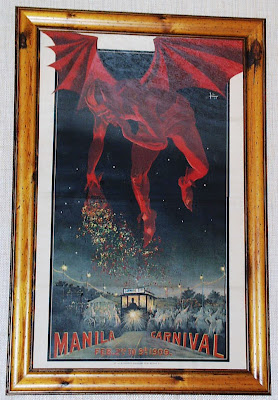 This very rare full sheet lithographed poster of the 1909 Manila Carnival is generously shared by Mr. Allan Schein, who acquired this beautiful work of art in 1976 from the renowned magic poster collector, Mr. Alan J. Kanter, who is also a childhood friend.

The artwork was made by a certain artist named Fuster, which shows the Red Devil sprinkling "joy dust" on Carnival revelers. Nothing much is known about the artist Fuster, who may have been related to one Antonia Fuster, one of the beauties who graced the Oriental Court of Pura Villanueva in the previous year's 1908 Carnival.

The Red Devil figure came to life in many of the Carnival parades, with people donning devil costumes not just in red, abut also in white, yellow, black and other colors. But it was the image of the Red Devil that became the signature figure of the Carnival, replicated in medals, program covers, and commemorative posters such as this fine example.

According to Mr. Schein, this poster, celebrating the national Carnival held from 2-9 February 1909, was originally glued to a cardboard backing, but has since been fully restored. It has been framed and occupies a special place in his residence.

(Many thanks again to Mr. Allan Schein, for sharing with my readers this extraordinary memento from our nation's history.)
Posted by Alex D.R. Castro at 4:07 PM 7 comments:

Early this fall, work will be begun for the Victory Carnival, which opens on January 31 and continues through February 8.

Hundreds of laborers will construct the big white wall which encloses the City and within its portals scores of buildings, to provide appropriate and artistic housing for amusement attractions and exhibits, will soon rear their towers. Plans for the Carnival City have been entrusted to one of the foremost architects of the Philippine Islands, and in beauty and lavishness of design, no previous Carnival setting will be comparable with it.

As has been the case in other years, the two dominating features of the Carnival City will be the high electric tower and the open air ballroom. Sparkling with thousands of small incandescent globes in all the colors of the rainbow, the lofty tower that stands in the center of the Carnival Plaza, crowned with powerful search-lights that throw their beams far out over the bay and back across the old city of Manila, is a perfect thing of real beauty; while the great auditorium with its perfect floor that will accommodate a thousand couples whirling in the maze of the dance, is one of the most unique as well as most beautiful structures anywhere in the world.

At night, when the lights are lit and the people of Manila with their guests give themselves over to revelry, the streets of the Carnival City become a wonderful kaleidoscope of color and life. Perhaps, nowhere else on the globe will the visitor rub shoulders with such a picturesque and cosmopolitan gathering. The American, the Englishman, the Frenchman, the Spaniard, the Russian, the Hollander, the Turk, the Hindu, the Chinaman, the Japanese, and the Filipino---there they all are, the Orientals in their native gala attire, their smiles speaking the common Carnival language, while bright eyes gleam roguishly through the showers of multicolored confetti that float down from above.

In the vast ballroom we meet them once more, the scene even being more picturesque because of the fancy masquerade costumes of many of the dancers. In its balcony sits the famous Constabulary Band, recognized as one of the leading musical organizations of the world, and to it melodious strains the cosmopolitan throng trips through the measures of the dance till dawn comes to dim the artificial lights of night.

On her dais, high above the floor sits the Queen of the Carnival, chosen from among the fairest of the many fair that the Philippines can boast, and her coronation is marked by the most stupendous spectacle of the nine-day revel. 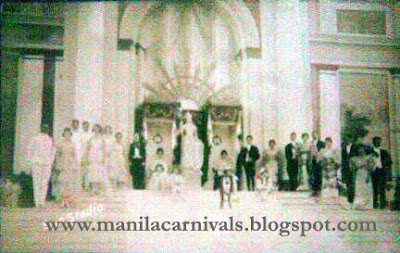 The whole city of Manila gives itself over to Carnival. The government makes each day during Carnival week a half-holiday. The public busies itself with preparations for those who come from without our gates and the entire stage is set for the banishment of worry and trouble. 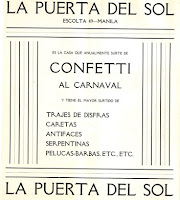 Steamship lines running to the Philippines will make available ships which will lie over here for most, if not the entire Carnival week. The hotels, led by the famous Manila Hotel, the most beautiful hostelry in the East, will perfect special arrangements for the accommodation of visitors and nothing will be left undone to make the stay of Manila’s guests a period of unalloyed pleasure. 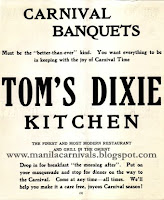 By way of special attractions, the military and civic parades, including the mammoth Carnival Parade, with which only the Mardi Gras pageant at New Orleans can compare, the Coronation Ball, the Army and Navy Ball and the popular Carnival Ball which will open the week’s festivities, will hold most prominent place. But within the Carnival City, the entire Orient will contribute its mummers, jugglers, its master of magic, its acrobats and its freaks for the entertainment of the subjects of King Mirth. In addition, the United States and Europe will contribute spectacular thrillers, who have proved their success at international fairs during the past year.

This and more Manila offers during Carnival Season. And for it, Dame Nature provides what is most perfect in her weather repertoire. Never a drop of rain falls in those early February days, but the sun, tempered by its long sojourn in the north, gives forth nothing but pleasant warmth during the day, while the nights, delicious in their coolness, are passed all too soon under the diamond-studded tropical sky and the Southern Cross.

Manila invites the world to this celebration of our victory. Her hospitality and all that she has are yours for Carnival Time.
Posted by Alex D.R. Castro at 4:10 PM No comments:

144. A Program Description: THE VICTORY CARNIVAL. part I

(Taken from the official souvenir program of the Victory Carnival and Exposition, Manila, P.I., January 31-February 8, 1920)

Nowhere in the Far East will the signal of the United States and the powers associated with her be as fittingly celebrated as in Manila, “The Pearl of the Orient”.

For eleven seasons, the people of Manila have made herself the playground of the East during the first days of February , when climactic conditions combine to make for perfect days and perfect nights. There has been but one lapse.

During 1918, when preparations for the 1919 Philippine Carnival had to be made, the United States was at war with the Central Powers. For patriotic reasons and in order to enable the Philippines to unite in placing every resource at the disposal of the American government and the various organizations active in war work, the 1919 Carnival was abandoned.

For this reason, the 1920 Carnival becomes the Philippine celebration for the great Victory and in it she invites the world to participate.

For those who have never seen Manila in Carnival time, mere words can conjure up but a faint picture of its attractions and beauties. It is the Mardi Gras of the Orient. It yields not to the Carnival of Venice nor to that of Rome. It is the meeting place of the East and the West. Practically, every nationality on the face of the globe is represented in its revels.

In setting, it is unique: A modern city of alabaster set as a precious jewel in background and medievalism.

On historic Wallace Field, facing the Spanish Luneta of romantic association, the Carnival City looks out upon the shifting blues and greens of Manila Bay, its turrets commanding distant view of the island fortress of Corregidor and the narrow passage through which Admiral Dewey led his squadron to a victory that implanted the Stars and Stripes upon Oriental soil. There it nestles, on its field of emerald green, and across it fall the shadows of old Spanish battlements, the historic walls built by the Castilian conqueror and still standing as a monument to the military genius of the Spain that was three centuries ago. 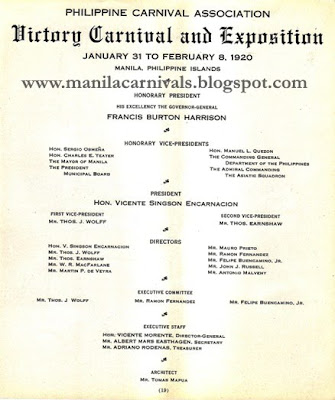 In 1920, this Carnival City will surpass all of its predecessors in size and splendor, for in addition to the regular Carnival features, there will be housed within it a commercial and industrial exhibit in which the 45 provinces and 920 towns of the archipelago will be directly represented.. But this feature of the great fiesta deserves a special mention apart.
Posted by Alex D.R. Castro at 4:06 PM 2 comments: