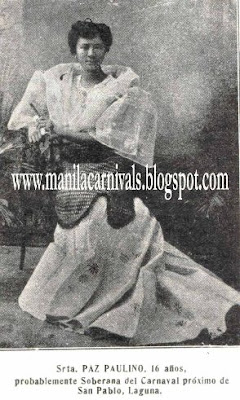 Another early supporter of the annual Manila Carnival was the province of “La Laguna”, whose people followed the happenings in the capital city with anticipation and excitement. Just like other provinces that caught the Carnival bug, Laguna also sought to replicate the spirit and the success of the national fair, by holding its own provincial carnival.

The rich coconut town of San Pablo was chosen as the site of the carnival, planned from March 28 to 30, 1913. The organizers put their energies to motion, vowing to compete with the Manila Carnival in terms of grandeur and gaiety. They sought to attract local tourists by drumming up the search for their own “Reina de Carnaval”, and early on, two formidable candidates for the crown loomed, which was played to the hilt in the national press.

The first frontrunner to the crown was the 16 year old beauty, Pacita “Paz” Paulino. The daughter of businessman Marcos Paulino, Paz, at such a young age, was an accomplished pianist, noted for her expressive interpretation of opera favorites and classical pieces, performed with heart and soul. Musically-gifted, highly cultured, Paz enchants, with both her beauty and talent, earning early approval from her provincemates. 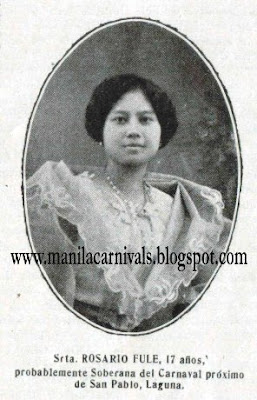 Standing in her way is the mestiza beauty Rosario Fule, just 17 years old, but already a popular figure in her home province, famed for her good breeding, admirable personality, and a kind of facial beauty that never fails to fascinate.

We would never know who brought home the crown ( subsequent issues of El Renacimiento did not carry follow-up news), but for sure, the real winner was the province itself, which pulled off its first ever Carnival successfully—not on the same league as the Manila Carnival as ambitiously envisioned—but worthy enough to merit coverage on the country’s leading dailies of that time.
Posted by Alex D.R. Castro at 1:47 AM No comments: