193. Queen of the 1926 Pampanga Carnival: JUANITA S. ARRASTIA of Lubao 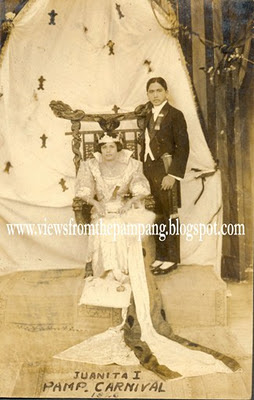 ARRESTING BEAUTY, Juanita Arrastia, Miss Pampanga 1926, had Basque and Filipino blood in her veins. She and husband, Dr. Wenceslao Vitug, continued to manage the hacienda left by her father, the richest hacendero of Lubao, and were known for their compassion and generosity in their treatment of their tenants.

Juanita Arrastia was a 24 year old beauty from Lubao when local organizers approached her mother, Francisca Salgado, to seek approval for her candidacy to the provincial fair. Her mother, in turn, referred them to Juanita’s father, Valentin Arrastia, who grumbled and showed no interest at the project. Unfazed, the organizers returned to plead with him. One day, tired of their implorings, he threw his arms in the air to dismiss them, and, walking away, exclaimed "Vanidades del mundo! (Vanities of the world!) They took that as a 'yes'.

Thus, Juanita became Lubao’s official bet to Pampanga’s royalty quest. The Arrastias descended from Basque adventurers from Spain who settled in the Philippines and found fortune in the vast agricultural lands they accumulated and farmed. Juanita’s father himself, was the richest hacendero in Lubao. It came as no surprise that she won the crown.

Many years later, when a granddaughter asked her about her beauty queen years, she knitted her brows, pursed her lips, gave her a side glance, and said in Kapampangan, "I won because my father had the biggest hacienda in Lubao. It wasn't about beauty."

But if truth be told, the Arrastia women were legendary for their beauty. “No one can be more beautiful than the Arrastia women”, one Philippine society observer even noted (Isabel Arrastia Preysler, former model and wife of Julio Iglesias, mother of Enrique and who latter married into Spanish royalty, came from the Arrastias of Lubao.)

At her proclamation, the lovely Juanita wore a glittery baro’t saya with a long train, attended by her two damas, Miss San Fernando and Miss Apalit. Military officials, young court pages, town muses and the governor of Pampanga shared the coronation stage with her. Her King Consort was her town mate, the dashing 22 year old Gregorio (Yoyong) Fernandez, then a freshman dentistry student at the Philippine Dental. Gregorio was also her 3rd cousin from the Salgado-Montemayor side of the family. He would go on to become a top actor and award-winning director and the father of the late action star, Rudy Fernandez. As a director, Gregorio is also credited with discovering Rogelio dela Rosa.

Juanita surprised everyone by getting married on 15 May 1926—just a few months after being named Miss Pampanga-- to Dr. Wenceslao Beltran Vitug (b. 28 Sept. 1891). Wenceslao (Apung Beses) came from a barrio of Arrastia sharecroppers, but news of his brilliance had made him a town celebrity of sorts. He overcame his humble beginnings by graduating at the head of his class at the Pampanga High School. He earned a medical degree from the University of the Philippines, practiced at the Philippine General Hospital and taught Medicine at his alma mater.

The marriage of Juanita to a ‘commoner’ who made good was big news in Lubao, where they settled and became hacenderos themselves, noted for their compassion and kindness to tenants. It was said that Dr. Vitug personally treated sick tenants while Juanita cared for the welfare of their families, even extending interest-free loans. The couple themselves were blessed with 7 children: Lourdes (Lulu), Amelia Juana (Melly) , Maria Magdalena (Nena), Antonio Jesus (Tony, a medical doctor), Luis Lamberto (died young, of bone cancer), Mario Venerando (died of aneurysm), and Roberto Nicolas (Bert).

The Vitugs would eventually settle in Manila , living long, full lives surrounded by the love of their children and grandkids. Wenceslao passed away in 7 January 1986 at age 94, while Juanita died in 8 September 1994. Their old Lubao house was acquired by an architect and had it transported to a seaside town of Bagac in Bataan where it is now part of Las Casas Filipinas de Acuzar.
Posted by Alex D.R. Castro at 6:47 PM No comments: