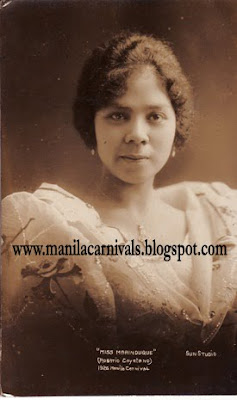 MARINDUQUE'S FIRST MISS. Rosario Cayetano, the first Miss Marinduque of 1926, as she appears in her official portrait at the Manila Carnival search for the first Miss Philippines, won by Anita Noble of Batangas.

Rosario Cayetano, the first Miss Marinduque, was born on 15 Oct. 1904, to Don Luciano Cayetano and Isabel Luces Luna of Gasan. She was the fifth child in a family of six daughters, namely, Trinidad, Amparo, Alicia, Clotilde and Hortencia. She also had a half-brother, Angelito Sevilla.
"Charito", as she was called, went to a local school in Gasan and earned her high school diploma from UP High. She was one of the first women from Marinduque to enroll at the state university for a degree in Pharmacy. In fact, it was at the U.P. that Charito, who had been reaping accolades for her beauty and charm since childhood, was picked to represent her province at the 1st National Beauty Contest of the Manila Carnival. At age 22, she competed for the first ever Miss Philippines crown against over 35 provincial bets. The title went to the Batangas beauty, Anita Noble. 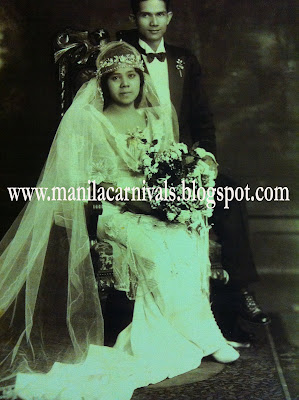 After the contest, she went right back to finish her Pharmacy course. Just a year later, she married her beau, Jose "Cito" Ocampo Lardizabal of Boac, on Christmas day, 25 December 1927. Jose's striking looks and achievements mirrored Charito's own gifts and talents. The son of Severino Lardizabal and Aquilina Ocampo of Boac, Jose was a brilliant lawyer at the time of his union with fellow Marinduqueno, Charito.
Charito and Cito proved to be a pioneering "career" couple--she ran a pharmacy in Gasan, while he advanced rapidly through the ranks of the judicial branch of the Philippine government--from Justice of the Peace in Gasan to Provincial Fiscal of Quezon Province.
The Lardizabals had eight daughters and one son: Esperanza, Norma (+), Linda (+), Nilda, Clemencia, Jose (+), Milagros, Agnes and Rosario. Interestingly, Agnes and Clemencia had Carnival beauties as godmothers--Mercedes de Jesus, Miss Marinduque of 1927 (for Agnes) and Aurora Reyes-Recto (for Clemencia), Miss Visayas 1926--whom Cito escorted in the 1926 pageant. Only son Jose "Joey" Lardizabal became a well-known TV-radio personality and and award-winning talk show host, appearing with Elvira Manahan on “Two for the Road” and hosting “The Morning Show” on ABS-CBN Channel 3, before he died of cancer on January 1971 at age 30. 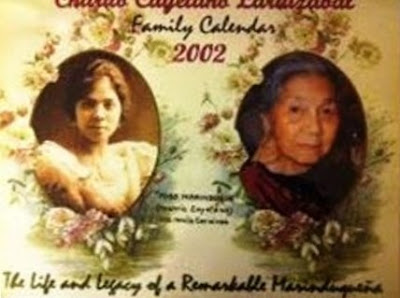 A 2002 calendar designed and printed by family members of the Cayetano-Lardizabal family to honor the life and legacy of a remarkable 98 year old Marinduquena, Rosario Cayetano, Miss Marinduque 1926. Photo courtesy of Mrs. Agnes Lardizabal-Apeles.

After Cito's death from coronary thrombosis in 1963, Charito moved to the family home in Makati while the rest of the children completed their education. In 1978, Charito immigrated to the U.S. after daughter Agnes's petition was approved. From 1978 to Sept. 2003, she lived in Los Angeles, California. Having worked all her life, Charito finally took up a hobby after her arrival in the U.S.--playing the slot machines in Las Vegas! 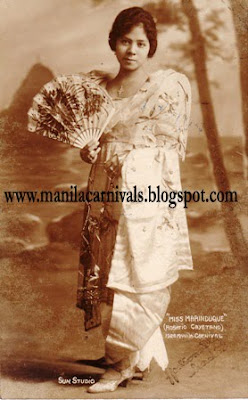 Charito lived to see her children settle down, raise their own families while pursuing successful careers in the U.S., Canada, Europe and the Philippines. She died two weeks short of her 99th birthday on 29 September 2003 in Harbor City, California. At the time of her death, she had 19 grandchildren and 26 great-grandchildren.
The life of Rosario Cayetano has spanned two continents and nearly the entire 20th century. She is remembered as a strong, vibrant force in the lives of her children, grandchildren, descendants and extended family members--her greatest source of pride. Their lives continue to reflect her unique character and values, which by doing so, also continue to bring honor to her name.
(Many thanks to Mrs. Agnes Lardizabal-Apeles of Calabasa, California, daughter of Miss Marinduque 1926, Rosario Cayetano-Lardizabal, for the wedding picture of her parents and for the biographical sketch of her mother)
Posted by Alex D.R. Castro at 3:39 PM No comments: 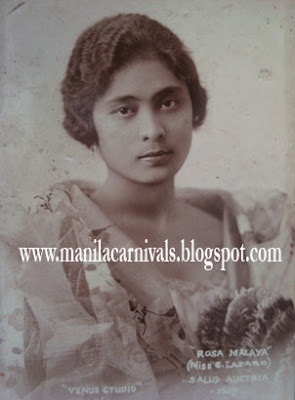 SALUTE TO SALUD. San Lazaro's beauty bet to the search for Miss Manila 1927. She ended up as a runner-up to Luisa Marasigan, who was named Miss Manila, and later, the 2nd Miss Philippines. 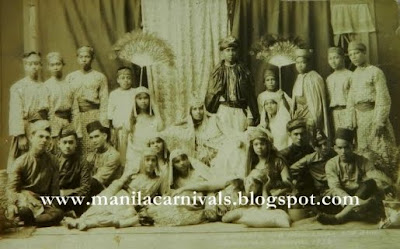 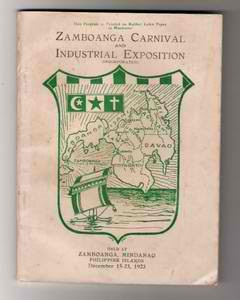 There were several other editions of the Zamboanga Carnival, with interest peaking in 1926, with Carmen Fargas’ unprecedented victory at the Manila Carnival Queen quest. As Miss Zamboanga of that year, she was chosen as Miss Pearl of the Orient Seas. The last pre-war Zamboanga Carnival was held in 1934.
Posted by Alex D.R. Castro at 3:59 AM No comments: 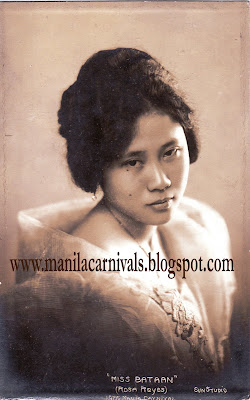 ROSA REYES, the first Miss Bataan of 1926, competed in the 1st National Beauty Contest of 1926.

The first official Miss Bataan to compete in the first ever national search for Miss Philippines was the lovely Rosa Reyes. Readers who know her are encouraged to send any information about this Bataan beauty who competed alongside provincial delegates for the prestigious Miss Philippines title, won by Batangas' Anita Noble.
Rosa Reyes was succeeded by Rosalina Fonacier, Miss Bataan of 1927.
Posted by Alex D.R. Castro at 3:29 PM No comments: 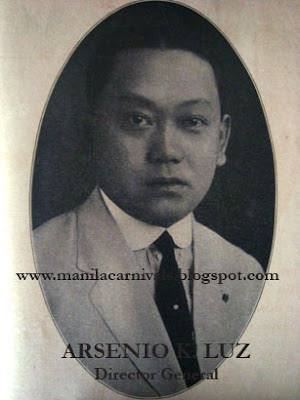 One of the most influential and high-ranking member of the Manila Carnival committee was Arsenio Katigbak Luz, who served as a Director General of the national event for several years. He comes from a well-known family from Batangas, the son of Segunda Solis Katigbak, regarded as Dr. Jose Rizal’s first true love. Segunda married Don Manuel Mitra Luz, with whom she bore 9 children—Cristeta, Manuel Jr., Flora, Paz, Julio, Justa, Valeriano, Fernando and Arsenio. 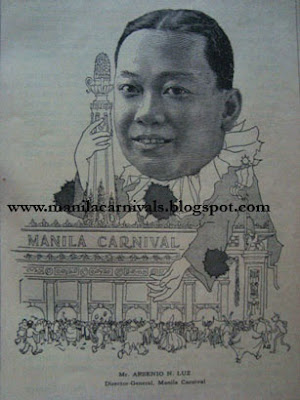 Luz became a successful businessman and journalist, and at one time was a writer for El Renacimento and La Vanguardia. He also became an editor for El Ideal and the Philippine Herald, which he also managed in 1922. His credentials included being the first president of the Rotary Club of the Philippines, the first director of Manila Hotel and also manager of the first sweepstakes organization in 1933. 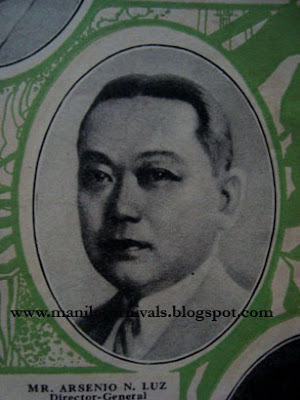 Starting in 1921, Luz was appointed as Director-General of the Manila Carnival, a position he would hold until the 1930s. He would introduce innovations in the national fair, seeking out new international talents and troupes to liven it up and modifying the layout to make the presentation more interesting. There was one year that he made the fairgrounds circular in shape defined by strings of light and a lighted tower. Indeed, year after year, his 'galaxy of new features' were never seen before in previous carnivals.

Luz married a cousin, Amparo Katigbak. They had a daughter, Amparito Luz, a trained soprano and a member of the Mossesgeld Choral Ensemble.
Posted by Alex D.R. Castro at 3:25 AM No comments: 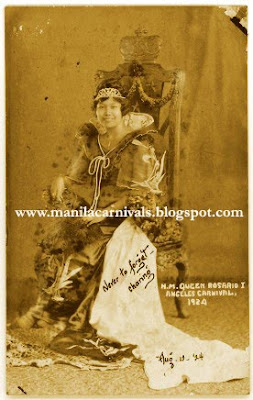 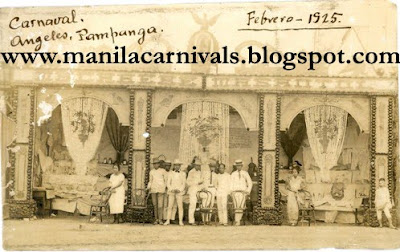 Not much is known about the 1924 Angeles Carnival except the fact that there was a repeat the next year, in February of 1925. prefaced a bigger provincial event—the 1925 Pampanga Carnival—where Rosario, once again, reigned as queen.
Posted by Alex D.R. Castro at 4:46 PM No comments: