As dual queens of the 1st Manila Carnival, Pura and Marjorie held equal rank and shared equal billings, but newspapers, egged by the crowds and their observations, played up the competition angle between the two, further fuelling more controversies, both real and imagined. 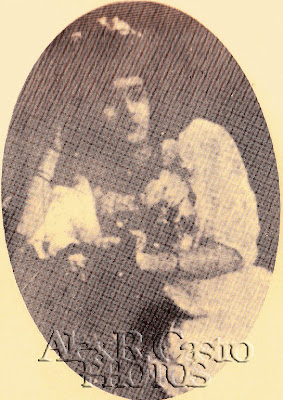 WHO'S THE FAIRER OF THE TWO? Oriental Queen Pura Villanueva, "this queen will not fade away"-the caption on this photo says.

First, there was the question facial beauty. The newspaper El Renacimiento was very vocal about who was the better-looking queen. In one important public appearance of the 2 royals, it observed: “The King and Queen of the Occident were very simple in their attire. Perhaps because they had come from a trip. But they were very ordinary looking, including the members of their court. Not so, however, those of the Orient….Altanera sin pedanteria, augusta sin pretensions, producto su distincion de la sangre y de la cuna” (Highborn but without ostentation, majestic without the pretensions, a product of refinement, in blood and in influence).

Then there was the issue of the Occidental retinue getting preferential treatment. For example, when the royalties arrived at the landing, the cars reserved for the Oriental court where nowhere to be found. Thus, Pura and her King Consort left for the grandstand, unattended. 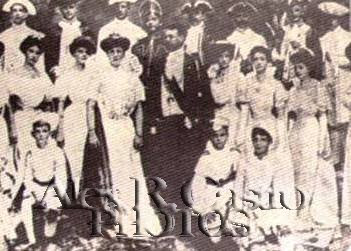 FAVORED AT THE FAIR? Newspapers reported the preferential treatment accorded to the American queen--from the carriage that was ever-ready to take her to carnival functions to the flowers she received.

More discourtesies towards the Oriental Royals were reported with astute observation. El Renacimiento recounted one circumstance: “ When the King of the Occident descended from his carroza, he had a bouquet of flowers for the Queen of the Occident, but not even a leaf for the Queen of the Orient. This was a grave fault and a crass ignorance of the forms of courtesy. A sacrilege to etiquette. Attention is due the Queen, who had graciously accepted them into her country”. 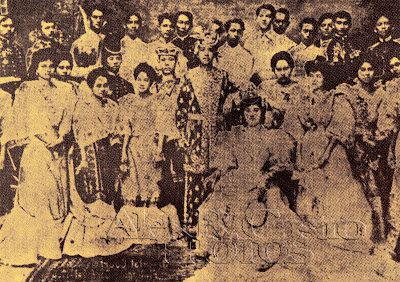 A MONARCH SPURNED. Although they introduced themselves at the Carnival gate as the King and Queen of the Carnival, Pura and Manuel were not immediately let in by the insolent 'portero' who even answered that 'not even Christ can enter without paying the entrance fee'.

The final insult was when the King and Queen of the Orient were refused entry into the Carnival fairgrounds. Detained by the guard at the gate, they were asked to pay the entrance fee of P.20 at the gate. El Renacimiento was livid. “Inandita osadia!!! (Such inane audacity!!!) The Orient Monarchs prevented from entering their own kingdom! Is this revolution or anarchy? All these reactions need immediate reparation.”

Pura was not to be cowed. She excused herself from one significant evening ball, alleging an indisposition, and the members of her court followed suit. As a demanded by native decorum, the whole court of honor resigned their positions.
Posted by Alex D.R. Castro at 3:37 PM