By 1915, the Manila Carnival had well established itself as the country’s premier event of the year. Even the selection of the candidates had undergone some welcome changes. Before, candidates were nominated by readers, but now the newspapers took absolute responsibility in fielding their own candidates. El Ideal , a leading Spanish language newspaper in the country threw its all-out support on its 15 year-old bet from Masbate, Concepcion Medina y Zurbito.

Concepcion was the unica hija of Don Sotero Medina and Restituta Zurbito, one of the richest families of Masbate, whose fortunes were built from their cattle ranch, coconut plantation and commercial real estate business. Sotero went on to become a town mayor while the equally accomplished Restituta was known to have founded the first puericulture center of her town.

Although Concepcion was born in Binondo on 9 January 1900, she considered herself a genuine Masbateño. It was in Manila that she spent her growing-up years, under the supervision of an aunt, Choleng Buencamino Zurbito. When she came of school age, she was enrolled at the Centro Escolar de Señoritas, then moved to St. Scholastica, where she pursued her piano studies.
CONCEPCION CROWNED. Her coronation ceremonies were one of the most lavish and complex in the history of the Carnivals, requiring four procession groupings in Roman finery.
Concepcion performed exceptionally well in the final secret voting and led all the way, amassing 46,500 votes, nine thousand more than her nearest rival, Josefino Ros of Cablenews American. In third place was the bet of Manila Times, Pilar Paredes. She handily won the queenship, the youngest ever to win the crown.

Her moment of triumph was attended with much pomp and pageantry, the likes of which have never been seen before. The motif was Roman, and the auditorium was designed like an arena fit for a Queen. Her grand entrance was preceded by a parade of “Roman” characters and officials, led by the first group headed by a praetorian bearing a standard of the Emperor, trumpeters and Numibian soldiers. A second group consisting of victorious gladiators with tridents, swords and shields followed, while senators, consuls and tribunes and a coterie of slaves composed the third group. The final group had a dozen dancing children, vestal virgins and priestesses, lamp bearers, flower girls and 8 more Numibians bearing the lovely Queen Concepcion on a litter, escorted by Emperor Nero and trailed by fan-bearing slaves and 4 prateorians.

DOING AS THE ROMANS DO. Concepcion, resplendent in her Roman-inspired gown.
A newspaper account reports: “Concepcion I presented a most charming appearance in her royal robes and wonderful crown…her arrival was greeted with prolonged applause from the largest throng that had ever been seen within the auditorium since the carnival began”.

On hand at her coronation was her dashing escort, Joseph Manning, the American Auditor General. Her royal court included Misses Natividad Lontoc (who would later marry Antonio de las Alas), Esperanza Limjap (future first lady and wife of Pres. Sergio Osmeña), Consuelo Felix and Messrs. A. Vasquez, Z. Buencamino and Jose Limjap. Among those who paid their respects to her royal highness were Gov. and Mrs. Francis Burton Harrison.

At the lavish coronation, the Queen was acclaimed with a poem extolling her beauty and virtue by poet laureate Bernardo Garcia. A special dance led by American society belles Carmencita MacLeod, Grace James, Phyllis Whitney, Margaret Ferrier, Hyberta Humes, Jean Dyre, Mahuma Clinton, Carmen Moreno. Bonnie Woodall, Leonora Dorney and Lois Thomas—was presented in her honor. The evening proceedings were presided over by Jerry Manning, her escort’s brother. It was a night Concepcion would long remember.

Five years after her reign, Concepcion met Dr. Andres F. Navarro, the son of the first mayor of Albay, Don Lucio Navarro, who had been assigned to the Constabulary staff in Masbate. They would eventually fall in love and marry on 4 March 1920 at the Lourdes Church in Manila. The newlyweds led a peripatetic life because of Andres’s assignments—first in Baguio, then in Iloilo, Cebu, Catbalogan, Zamboanga, Cabanatuan, Palawan, Sorsogon and other Bicol towns.

The union bore four children: Luisa, Naida, Andres Jr. and Lydia, all college graduates before they raised their own families. When Dr. Navarro retored in 1948 due to illness, the couple moved back to Masbate. Post-retirement, Concepcion went on a world tour in 1951, covering the U.S., Canada and various European and Asian countries. In 1958, Dr. Navarro passed away at the Philippine Veterans Hospital. Concepcion survived him for many years, and in her mid 70s, planned to visit Australia and South America.

It could be said that Concepcion lived an almost a perfect life—marked with the joys of her childhood and of her wonderful reign as a Carnival queen, the happiness of her married life and the fulfillment of her long, golden years.
Posted by Alex D.R. Castro at 4:28 AM 3 comments: 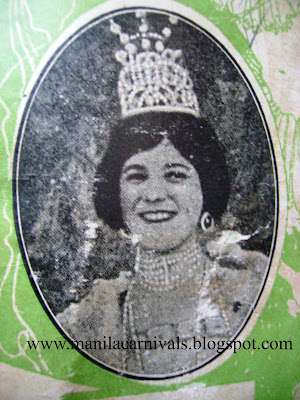 1914 QUEEN OF THE MANILA CARNIVAL. Dolores Perez Rubio of Manila, belonged to a well-known family of Spanish descent. She was better known as Queen Lolita I.

The 1914 edition of the Manila Carnival went on schedule, hardly showing the effects of World War I. The festivities of that year brought back the romantic Spanish element of Philippine society when Dolores Perez-Rubio was elected as queen. Her parents were Jose Perez Rubio and Carolina dela Cerna, both of pure Spanish aristocracy, and it was in the genteel district of Ermita that the Perez-Rubios settled.

The Perez Rubios were a large family, and Lolita ( as Dolores was called) had seven other siblings: Pepita, Luz, Hortencio, Jose, Carlos and twins Rosa Blanca and Blanca Rosa (later known as Mother Blanca of the Assumption). The Perez Rubio girls were caught up in the heady social whirl of Manila, often invited in gala events such as the ball given to the Prince of Wales of England who had come visiting Manila. 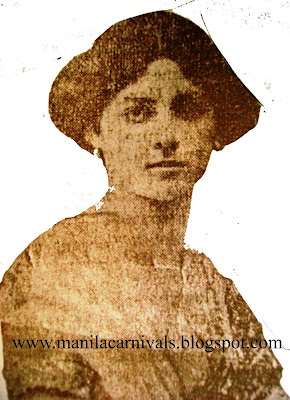 BEAUTIFUL VICTIM OF WAR. The Perez Rubio family suffered much in the last war, with the family almsot completely wiped out save for a handful of members like Dolores and her sister, an Assumptionist nun, who took shelter in the convent that survived the 1945 bombings.

Dolores could recall very little of her Carnival days, her prize included a sterling silver dressing set. But she had vivid recollections of a visit to Australia, which she undertook to rest after her hectic Carnival activities. The Australian governor accorded her a warm welcome and she was the special guest in a fabulous festival. Wearing a gown she wore at her coronation, she was awarded a Golden Apple by a panel of judges for being the most beautiful woman of the event.
When she returned to the Philippines, she met and married a captain of the British Royal Air Force, Robert Gregory. The second World War was to bring much tragedy and sorrow to the Perez Rubio family. Her husband, assigned in Hong Kong, perished in the fighting there. During the Liberation of Manila in 1945, the family was nearly decimated with the exception of Blanca Rosa who was already in the Assumption convent by then, and Dolores—who had sought refuge in the same place. The convent was one of the few that survived the bombings of the War.

This is one reason why only a few photographs of Dolores can be found today; the Perez Rubios lost family members, their homes, properties and belongings, and the rest who survived chose to leave the Philippines to get away from it all. Dolores herself, flew to England with her children. She survived her own daughter and lived for the rest of her life in London.
Posted by Alex D.R. Castro at 4:25 AM No comments:

For the 1913 Carnival Queens, exquisite, jewel-studded crowns were made by the famed engraver’s workshop of Crispulo Zamora (b. 10 June 1871). Crispulo was the son of Mauricio Zamora and Gervasia Guzman. He learned the rudiments of engraving at his father’s shop in Quiapo and was later enrolled at the Esuela de Dibujo y Pintura, studying painting (under Lorenzo Rocha), engraving (under Melecio Figueroa) and casting (under Felix Martinez). 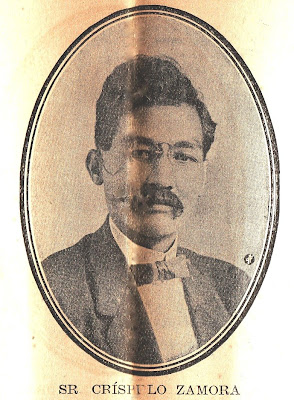 Married to Pelagia Mendoza, herself an accomplished artist. At the 1895 regional exposition of the Philippines, he won a prize for a portrait bust he submitted for the arts competition. The couple took over the shop when Crispulo’s father died and grew the business, making metal products from military decorations to buttons and insignias for many institutions. The shop also created plaques and religious crowns for images—the crown of the Virgen de Penafrancia of Naga was one such product.

Soon, Crispulo Zamora was being commissioned to make the bulk of medals, trophies and crowns for the annual Manila Carnivals. The most spectacular crowns that he created were perhaps those of the 1913 Carnival beauties, which were featured in the 1913 issue of El Renacimiento. He conceptualized a design in which the three regional beauties—Julia, Ana and Inocencia—were looked at as the 3 radiant stars of the Philippine flag—and so each silver crown they wore was topped by a star. 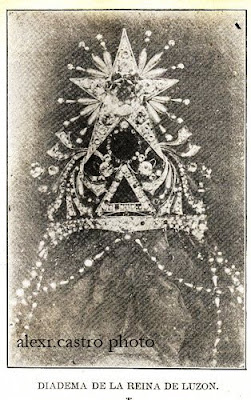 The crown for the Luzon Queen had a magnificent starburst atop a triangle representing the 3 regions of the Philippines. The crown for the Visayan Queen was accented by a plume, while the Mindanao Queen wore a crown that incorporated a crescent moon, a Muslim motif. 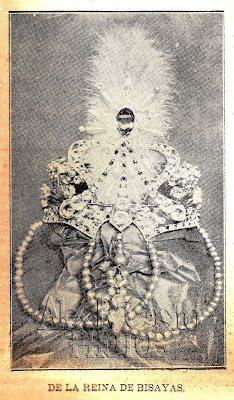 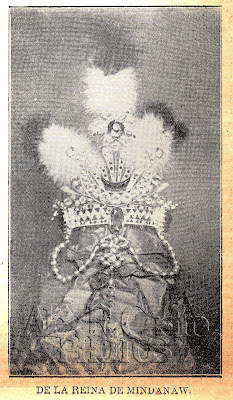 Zamora also designed the trophies awarded to different competition winners, most in Art Nouveau style. Some distinctive Filipino elements were used by Zamora to embellish cups and trophies, like bamboo and coconut leaf fronds. 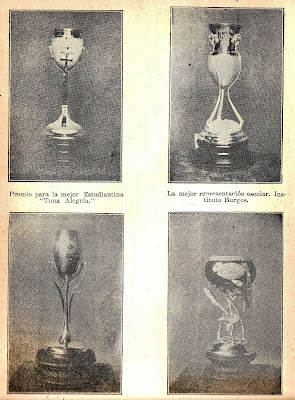 In terms of design, artistry and craftsmanship Crispulo Zamora was in a class of his own. When he passed away in 1922, his wife Pelagia continued on with the metal engraving business.
Posted by Alex D.R. Castro at 5:19 PM No comments: